Flood damage: ‘We got the TV upstairs, then we had to abandon’ 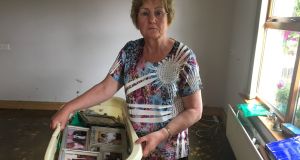 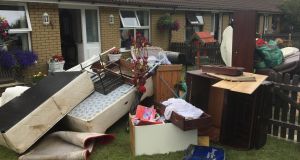 More than 100 homes in the village were flooded – some within a matter of minutes – after heavy rain hit the north-west on Tuesday evening. Photograph: Freya McClements

The contents of entire houses have been emptied into the street in St Canice’s Park in Eglinton, Co Derry.

There are wardrobes and fridges in front gardens, while chairs and tables are being lifted onto the backs of lorries.

The smell of heating oil and sewage hangs in the air.

Inside the houses, black stains mark the high point of the water, and sludge and slit sits on the floors and carpets.

More than 100 homes in the village were flooded – some within a matter of minutes – after heavy rain hit the north-west on Tuesday evening.

“Like everybody else I’m devastated, I’ve only the four walls left. I’m staying now with my son,” she says. “I’m very unhappy. You build up a home and then something like this happens, it’s heartbreaking.”

Two doors down, Michelle Devine and her brothers are helping to clean up their mother’s house.

“I’m devastated for Mammy,” she says, “and for my brother Michael, he has Down’s Syndrome and he lives with her.

“He was so afraid of the water when they were flooded, it was hard for him to witness that.”

Both her mother and brother had to be rescued from the floods by the fire service. “The house was only done up, I had the whole house papered and painted recently and it’s empty now. There’s nothing left.”

Water two feet deep rushed into Jacqueline McCready’s house in nearby Dunverne Gardens in only five minutes, leaving it uninhabitable.

“The water was running down the street,” she says. “On either side of the front door, it was just gushing in . . . We got the TV up the stairs and then we had to abandon the downstairs.

“I have to thank the fire brigade, the minute I saw the fireman I felt safer.”

She has since been housed in temporary student accommodation, and she has no idea when or if she will be able to return home.

“We have no electricity and we have no food, we have walls and that’s it,” she adds.

“I’ve no insurance. I’ve lived there since I was three and a half, but recently the insurance premiums became too high. It’s because of the river behind the house. The minute they say you have a river, they say no and put the phone down on you. The politicians need to do something about that.”

Mrs McCready is one of many people who have come to the flood help centre which has been set up in Eglinton Community Hall for assistance.

Officials from Derry City and Strabane District Council, the Housing Executive, NI Water and others are on hand to take the details of families who have been affected by flooding, and to see if they can help.

“We were open all night on Tuesday,” says Ivan Morrison, the community association’s treasurer.

“Since then we’ve been giving people shelter, and feeding them – lots of people have no electricity or heating, and no way of cooking food.”

Local supermarkets and food banks have been donating supplies of food, clean clothes and bleach.

“It’s great to see the whole community getting together and helping like this,” said Maj Joan Archibald from the Salvation Army, who was helping to deliver groceries from a food bank.

“People are pulling together. It takes a crisis, but I’d love to see this spirit all year round.”