Adamstown restarts after a decade in the doldrums

Prices €100,000 below Dublin average with permission for 800 more houses expected

200 new homes are currently being built in Adamstown, Co. Dublin, after clearance and funding for construction has been granted. Olivia Kelly reports. 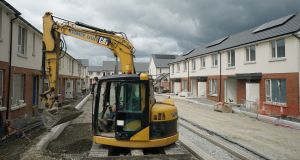 Some of the 200 homes that are currently under construction in Adamstown, Co Dublin. Photograph: Enda O’Dowd

Following a decade of stalled development, work has restarted at the west Dublin suburb of Adamstown with more than 200 houses under construction and planning permission for 800 more expected to be approved by the end of the year.

For the first time since the economic crash, house building in Adamstown has at last become “viable” again, according to developers , with almost 70 per cent of homes selling for under €300,000, against average Dublin house prices of more than €400,000.

The first new town of the 21st century, Adamstown, 16km west of Dublin city, was designed to be a model of good planning and sustainable development – unlike its neighbours of Lucan and Clondalkin, where small country villages became vast sprawling suburbs, with little thought given to the infrastructure needed to sustain thousands of new three-bed semis.

Residential development in Adamstown would be progressed along with schools, shops, community and sports centres, parks, playgrounds and, crucially, transport infrastructure, including rail links to make the new town far less car dependent than its west Dublin neighbours.

This would be achieved through the creating of the Ireland’s first strategic development zone (SDZ). The concept pioneered in Adamstown has become more familiar in recent years with such schemes created in Dublin’s Docklands, and Cherrywood.

The focus has always been on the “fast-track planning” element, the theory being that delays in the planning process were what has been holding back house building. Once an SDZ for an area has been approved, applications which comply with it will be granted permission, and cannot be appealed to An Bord Pleanála, reducing the time large developments could spend waiting for permission from more than a year to two months.

However, SDZ schemes aim to achieve much more than quick start construction. They aim to eliminate piecemeal development, by planning all elements of the town’s development over its lifetime up front, and requiring developers to provide the infrastructure, not just the housing.

The towns would be developed in phases, with developers having to complete the facilities required in each phase, before they could move to the next tranche of housing.

In September 2003, the Adamstown SDZ was approved for the development of more than 10,000 homes the majority of which would be high to medium density apartments or duplexes. Construction rapidly followed in 2004 and by 2006 the first homes were occupied in the Adamstown Castle development.

The scheme progressed as intended; in 2007 two primary schools, a train station and a small park opened, the following year a creche opened and in 2009 Adamstown got a secondary school.

Then, as rapidly as it began, development all but stopped, with just one application lodged in 2010, and two years after that, none at all. Between 2010 and 2014 fewer than 20 homes were finished. By 2014 just under 1,400 homes had been built, no development had started on the district centre, which was to have a supermarket, library, cinema and healthcare centre, or on the leisure centre and swimming pool.

In 2014 An Bord Pleanála allowed South Dublin County Council to change the terms of the SDZ, to reduce densities by 15 per cent (the council had sought a 20 per cent reduction) and push out the phasing of certain elements such as the swimming pool.

The effect of this was to allow more houses than apartments be built and to reduce the overall number of homes from 10,000 to about 8,000.

There was, however no immediate effect on development, with secondhand house prices still far lower than what developers said was the cost of new construction.

Developers got another fillip earlier this year when the Government announced that €20 million in public money from the local infrastructure housing activation fund (LIHAF) would be given to fund parks and a new road linking to the Celbridge Road.

At some point in the last year, cost/profit balance tipped with construction now under way in at least four developed Adamstown estates. However, what is being built now in Adamstown differs significantly from what was planned, with all of the newly emerging estates look much like any other traditional development in any suburb.

The density revisions to the Adamstown scheme and the provision of State funding for infrastructure, which was to have been provided by developers, have been seen as the local and national government allowing developers to dodge their responsibilities.

However, Brian Keaney, senior planner with South Dublin County Council, says the reality of the markets cannot be ignored.

“The challenge of the SDZ is to ensure that infrastructure comes along with the housing, be that schools, be that public transport. If the cost of providing that infrastructure is seen as too punitive in terms of the market that is developing it can slow down all development.”

The changes made to the planning scheme were working, Mr Keaney says, not only in the development of housing, but with a new community centre and sports hall due to be completed early next year.

Eventually the capacity for two-storey terraces and semis would run out, he said, and apartment development, particularly in the vicinity of the train station, would again become viable.

According to Castlethorn Construction, the biggest developer in Adamstown, that point is still some way off.

“Higher density products are not yet viable, but it is viable to develop houses. As the markets gradually recover, higher and medium density will become viable,” Hugh O’Neill, director of operations for Castlethorn, said.

The company has recently sold 150 houses, which it expects to have finished and occupied in the coming months. Of these, 85 per cent were sold to first-time buyers, and 68 per cent cost under €300,000, a trend the company will continue with the delivery of 500 more homes “in the short term”, Mr O’Neill said. “Adamstown SDZ has the capacity to deliver more affordable homes faster than any other single development in the country.”

Similar views are held by Cairn Homes which owns a quarter of the land in Clonburris, the new suburb planned for a 280-hectare site opposite Adamstown.

Cairn is already building in Adamstown, but plans in the region of 3,000 new homes for Clonburris, the first of which could be available by the end of next year with prices also below €300,000.

“Market demand in this catchment is primarily geared towards family housing rather than apartments,” Ruchika Hassan, Cairn’s director of sales and marketing said.

The firm is urging the council to take a “prudent approach” is to the phasing of infrastructure delivery in Clonburris, “which facilitates early delivery of housing and which in turn will provide the economic catalyst for subsequent infrastructure development,” she said.

“Dublin is in the middle of the worst housing crisis of its history with the biggest demand and need for affordable home and we would like to be onsite today building well-built, competitively priced new homes.”

Director of planning with the council Eddie Taaffe said both Adamstown and Clonburris would develop with community facilities and schools within 400m of any home.

“We are confident that the developers can deliver. We need to increase construction activity by a multiplier of four, and the more development options there are the lower prices will be.”