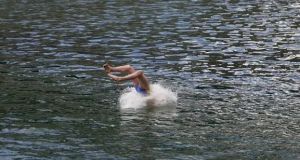 Swimming in the Liffey.

Bathing water quality on one of the most popular sections of the river Liffey for water sports has been graded as “poor”, with high pollution levels detected in tests carried out by South Dublin County Council.

Concerns are growing for the use of the river as an amenity, particularly by children during the summer, and for the council’s plans to create a new “blueway” river trail.

The Liffey from the Dublin/Kildare county boundary to the Strawberry Beds is heavily used all year by sports clubs, particularly for rowing and kayaking, and is also popular with swimmers in the summer.

However, because it is not one of Dublin’s official bathing areas it does not feature in the Environmental Protection Agency’s annual bathing water quality report.

Tests were undertaken by the council using the EPA’s classifications of “excellent”, “good”, “sufficient” and “poor” water quality on six occasions between last December and March of this year, during various levels of water flow. None of the sample sites scored greater than “sufficient”, with three rated as “poor”.

“The results showed that of the five sites sampled the waters near the Wren’s Nest pub consistently met the bathing standards classification of ‘sufficient’ and the waters at Knocknemaroon bridge, with the exception of one occasion, also met the ‘sufficient’ standard. However, the three upstream sites from the N4 Leixlip to Lucan Bridge were classified as ‘poor’,” the council said.

Several sources had been identified as likely contributors to the river’s “microbial” or bacterial contamination, the council said.

“Other sources of microbial contamination may include upstream agricultural land use and municipal waste-water treatment discharges.”

Fine Gael councillor William Lavelle said the “incredibly poor quality” of water in the river was not getting the attention it deserved.

“These results are very concerning given the regular usage of the area around Lucan Weir for water sports and for bathing at times of hot weather. If this was a beach there would likely be a furore over the poor water quality.”

The council undertook the water assessment ahead of the developing of a “blueway” along the river from Chapelizod to Leixlip – a tourism and leisure project that aims to develop a waterside park with an emphasis on water-based activities.

“There is an increasing understanding of the value of the river as a recreational and tourism amenity, which makes the incredibly poor water quality such a concern and a disappointment,” Mr Lavelle said.

“I will be calling on the South Dublin County Council to engage with Kildare and Fingal County Councils and with Irish Water who have responsibility for the Leixlip waste-water plant to put in place an action plan to seek to improve the water quality of the Liffey.”

A spokeswoman for Irish Water said it had recently completed a €23 million upgrade of the Leixlip waste-water treatment plant which would “double the capacity of the existing treatment plant, and ensure water in the lower Liffey valley meets regulatory standards. As well as this, effluent from the plant will comply with Environmental Protection Agency standards.”