Farmers and sports clubs count the costs of Tyrone flooding 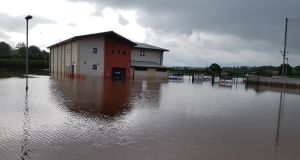 The clean-up is continuing at the Mid Tyrone club Beragh Red Knights, which suffered its third flood in nine years 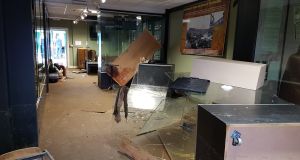 Damage to the GAA heritage museum under the Nally Stand in Carrickmore, Co Tyrone

Farmers, homeowners and sports clubs are assessing the impact of some of the worst flooding in living memory in Tyrone.

Northern and central areas of the county were among the worst hit as almost two-thirds of the average rainfall for August fell inside nine hours on Tuesday night.

The surging torrents tore away some bridges and swept away livestock in the Sperrins region.

Speaking on Thursday as he gathered more than 70 dead sheep scattered across his lands near Gortin, farmer Martin Brogan said it was the worst flooding he had ever witnessed in the area.

Nearby, Karen Wilson, a mother of two, described the moment she and her husband decided to flee their home on Tuesday night as “pandemonium”.

Rising waters from a nearby stream soon submerged the ground floor of their two-storey house in two feet of water.

Despite the intensity of the conditions, the number of Tyrone homeowners affected is lower than in similar flooding incidents in 2008 and 2011. Flood defence projects recently completed in villages such as Beragh, Ballygawley and Fintona saved families beleaguered by flooding in the past decade.

But the same cannot be said for the village of Plumbridge, which remains a picture of devastation. The local parish hall and three businesses suffered substantial damage, with significant damage to the local road network and a bridge in the north Tyrone village.

Concerns have been expressed over the instability of a number of smaller rural routes around the county after a road and part of a bridge collapsed near Carrickmore.

The clean-up is also continuing in a number of GAA clubs. The £1 million pavilion belonging to Mid Tyrone club Beragh Red Knights’ suffered its third flood in nine years.

Several miles up the road in Carrickmore, a museum and gym built under the old Nally Stand from Croke Park was substantially damaged. Farther north, St Eugene’s Club in Newtownstewart endured similar destruction, while nearby soccer club Ardstraw saw recently completed upgrades swept away in a matter of hours.

For homeowners, a £1,000 emergency payment scheme remains in place until August 31st. However, calls have been made from political leaders to introduce additional funding to address the impact to farmers in particular.