‘Small bodies swaying with the vigour of their chewing’

Michael Viney: Sandhoppers are the most prolific animals in the ‘splash zone’ above the highest reach of spring tides, and scientists have been fascinated by their navigational capacities 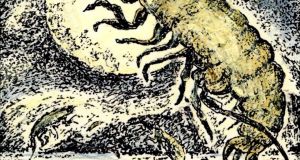 Sandhoppers, or tonachán trá: ‘Usually there are a huge crowd of them together, helping each other loyally and stoutly’. Drawing by Michael Viney

Between the mowings of summer winds and wrenching storms of winter, a huge mass of seaweed, rich in sugars and minerals, is cast ashore. Nature doesn’t do waste, so recycling goes on, even along a bleak and wave-pounded stretch of sand.

In the final dissolution of a bank of rotting kelp, a sulphur-and-iodine reek speaks pungently of bacterial action. But the process is set in train by a multitude of tideline scavengers.

The industry and behaviour of the biggest one that chews seaweed has sometimes inspired exalted impressions of its mood. Séamus Mac an Iomaire, watching sandhoppers at Connemara’s Mweenish island a century of so ago, paid tribute in The Shores of Connemara:

“He is always working at ebbing tide,” he wrote of the tonachán trá (otherwise Talitrus saltator), “making small holes under the sand . . . He raises his hard, pointy little head from time to time to look around to see how the labour is going . . . Usually there are a huge crowd of them together, helping each other loyally and stoutly . . . ”

Digging furiously with five pairs of legs and kicking the sand out behind it, with the same tuck-and-flick of the tail that produces its leap when disturbed, the 20mm amphipod crustacean takes about 10 minutes to excavate a burrow, up to 30cm deep, as a moist refuge for the day. Juveniles, meanwhile, hide in moisture beneath the wrack.

Sandhoppers come out to feed at dusk on wet sand, munching on the weed, on washed-up crab legs or other marine flotsam. Rachel Carson, roaming the darkened shore of Maine, was struck by “their small bodies swaying with the vigour of their chewing”. At dawn the animals retreat upshore to burrow above the line of the next high tide.

Sandhoppers are the most prolific animals in the “splash zone” above the highest reach of spring tides, and scientists have been fascinated by their navigational capacities. They have an innate sense of direction and can reset their biological clock to match the rhythm of the tides.

They need the first capacity to hop the right way for their nightly foraging or to find moist sand in which to burrow, and the second to time their retreats and advances.

Lab tests have established that sandhoppers born on the Atlantic coast of Spain hop west to find wet sand at the sea’s edge in which to burrow if dislodged by foraging seabirds. Those born on the tideless Mediterranean head south – an impulse that govern new-born sandhoppers wherever they find themselves.

In free-living animals, a sense of direction might seem to flow from the slope of the sand. But sandhoppers born in the lab have also been shown to use sun and moon as compasses, wherever these are in the sky or whatever shape the moon is.

The ease and low cost of study and experiment, and the ubiquity of Talitrus saltator on European shores, have brought a new direction of research. It can be used to monitor the coastal presence of trace metals and man-made poisons.

There have been many such studies, mostly in the Mediterranean and Baltic, but a team of Irish biologists has made the first assessment of sandhoppers along a stretch of northeast Atlantic shore that includes a city.

Led by Dr Liam Morrison of NUI Galway, the study tested samples of sandhoppers from 10 beaches along Galway Bay, spreading out from the city and the Corrib estuary, westwards to Spiddal and eastwards to Renmore.

Concentrations in the animals of 13 trace elements, including manganese, cadmium, iron and zinc, varied greatly along the shore, with a lot of lead at Nimmo’s Pier, close to a former landfill, and least pollution at either end of the sampling. Compared, indeed, with some sinister findings from the Mediterranean and the Baltic, the generally low traces in the bay make a useful baseline.

Meanwhile, how are sandhoppers getting on as the world’s sandy beaches draw more and more people? Some telling research comes from Poland, where 60 per cent of the Baltic coastline is reckoned to receive more than 100 human steps per square meter every day in the peak summer season.

In a survey some 50 years ago, Talitrus saltator was found almost everywhere on the Polish coast. In 1996, sandhoppers were dug up, counted and released at every 10km along 500km of coast, including the hot-spots of tourist use. This study found a marked decline in sites still with sandhoppers and a distinct drop in their average density.

Most tourists enjoy looking at seabirds, but not at drifts of seaweed or sandhoppers, so some local authorities “clean” their sand with bulldozers. Between summer trampling and benthic cleansing, life at the sea’s edge can thus be many hops from what it used to be. For the moment, at least on the wilder Atlantic way, the tonachán trá can breathe easy in its burrow.