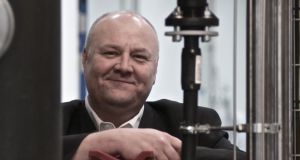 Graham Cooley, ITM’s chief executive, believes the increasing levels of wind-generated electricity that the Republic uses makes it very suitable for the production of green hydrogen.

London-listed hydrogen technology manufacturer ITM Power is eyeing opportunities in the Irish market as the Republic steps up its push on green energy.

ITM, whose partners include oil major Shell and industrial gas giant Linde, makes electrolysers, which uses electricity to split hydrogen from water, allowing the gas to be stored for use in transport and industry.

Graham Cooley, ITM’s chief executive, believes the increasing levels of wind-generated electricity that the Republic uses makes it very suitable for the production of green hydrogen.

However, Mr Cooley added that ITM was not in a position to give details on any talks with players in the market here, as it was a quoted company.

The Republic, along with other EU countries must come up with a strategy to boost hydrogen’s use in the coming months. Mr Cooley predicted that investors would watch this “with interest”.

Electrolysis can use excess electricity, produced by wind and solar power generators during periods when it is not needed, to produce hydrogen, hence the description “green”.

Mr Cooley explained that this means the technology can help overcome the question of how to store excess electricity generated by renewables.

As they can only generate electricity when wind speeds are suitable, wind farms often produce power when it is not needed.

Companies building wind farms are also considering installing batteries to store the power, but the industry and policy makers, including the EU, are increasingly looking at electrolysis as another solution the problem.

Hydrogen can replace natural gas, making it suitable for use by industry. It can also be used in transport, particularly by heavy vehicles, for which electric engines do generate enough power.

Another State company, Gas Networks Ireland, the utility responsible for natural gas supply lines, intends testing hydrogen for use on its system at a facility in Co Dublin.

Mr Cooley argued that hydrogen is the only net zero carbon gas. Burning it produces little or no greenhouse emissions, as this simply combines it with oxygen to form water.

The cost of producing the fuel is also falling as technology advances. Mr Cooley estimates that it will be cheaper than natural gas by 2030.

In July, the EU pledged to invest €150 billion in developing hydrogen technology between now and 2030.

The European Commission estimates that the market for the fuel could be worth €630 billion a-year by 2050.

ITM is working with Shell on an electrolysis plant at the oil giant’s Rheinland refinery in Wesseling, Germany. This is likely to produce its first hydrogen in early 2021. It also recently signed a joint venture with industrial gas producer, Linde.

The British company is due to move into what will be the world biggest electrolysis plant in Sheffield in England, next month.