Concern over felling of mature oak trees at Longford estate 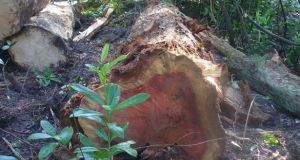 A sequoia felled at the Longford estate. Photograph: Friends of the Irish Environment

Campaigners for the environment have expressed concern about the felling of at least nine mature oak trees up to 80 years old in the grounds of the Castleforbes estate in Co Longford.

Minister for Agriculture Michael Creed has confirmed an investigation into the felling on a 7.07-hectare area of woodland last year has been completed.

Friends of the Irish Environment complained in April last year about the felling, which was being conducted under a licence, after work allegedly continued into the bird-nesting season. However, after an investigation, work was resumed as no condition to protect the birds had been included in the felling licence.

Work ceased again in June 2016 after two letters from the National Parks and Wildlife Service were sent to the Minister requesting a halt to the works.

In a letter to Independents4Change TD Clare Daly last month, Mr Creed’s private secretary noted the investigation arose following complaints received about the reported felling of oak and replanting with Sitka spruce at the estate.

The letter said the felling licence referred to a submitted woodland management plan that proposed the felling of Sitka spruce and birch.

“Furthermore, the cover note that accompanied the felling licence, while having no legal status, stated that all oak, holly and rowan be left standing,” it continued. “There was therefore no legal consent given for the felling of oak trees. The forestry inspector for the area has now confirmed that there is evidence of at least nine oak trees felled along the periphery of the area.”

The letter noted an inconsistency between the felling licence and its cover note with regard to what trees were to be replanted, and said this inconsistency was “unsatisfactory”.

Procedures were being put in place to ensure that felling licences were clear in relation to exactly what was required of the licensee, the letter added.

“Due to the passage of time, the pursuit of an alleged illegal felling case is not possible in this instance. However, the landowners have agreed with the department to replace a portion of the replanted Sitka spruce with native Irish oak, to ensure that over 10 per cent of the total plot area comprises newly planted oak.”

Mark Connellan of Rawdon Estates said he could confirm “emphatically” that the company had complied fully with all its legal requirements in felling trees at the Castleforbes estate.