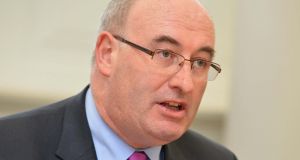 EU Commissioner for Agriculture Phil Hogan: he has launched a consultation on the future of the Common Agricultural Policy (Cap): Photograph: David Sleator

Planned reform of the EU’s agricultural policy must focus on ensuring farmers achieve viable incomes in return for the high-quality food they produce, the Irish Farmers Association (IFA) has said.

The organisation was commenting after EU Commissioner for Agriculture Phil Hogan published a consultation document on the Common Agricultural Policy (Cap) and urged farmers and all interested in the future of food and farming to contribute to it.

The reforms must also ensure direct payments went to “active farmers who protect the environment and produce quality food”. There should also be an enhanced rural development programme for farm schemes, he said.

First launched in 1962, the Cap has an annual budget of about €59 billion. Its main objectives are to provide a stable, sustainably produced supply of safe food at affordable prices, while also ensuring a decent standard of living for 22 million farmers and agricultural workers across the EU.

“Strong funding for the Cap budget is justified by the multiple benefits the policy brings for all European citizens, in terms of sustainable food production, environmental protection and economic development,” Mr Healy said.

He said there should be no reduction in the Cap budget as a result of Brexit.

If EU solidarity meant anything, he said, then the budget shortfall “must be made good so that farmers are not hit with Cap cuts when the UK leaves”.

He welcomed Ms Hogan’s commitment to making Cap less complex and said he hoped this would reduce the unnecessary stress burden on farmers.

Announcing a three-month consultation process on Cap reform in Brussels, Mr Hogan said it needed to be modernised and simplified for the 21st century.

This would allow it “to better respond to today’s social, political, environmental and economic challenges”.

The three-month consultation is the first phase of the plan and legislative proposals are expected to follow by 2018, Mr Hogan said.

He said it came days after data released by the commission clearly showed that, despite the aims of 2013 Cap reforms to redistribute funds more fairly, there were still huge inequalities in the system.