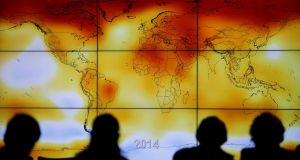 The Green Party has criticised the Government for “committing public money” to the development of Ireland’s petroleum industry less than 24 hours after the Dáil passed the second stage of the Fossil Fuel Divestment Bill.

The criticisms came after the Department of Communications, Climate Action and Environment posted a call on its website encouraging science graduates to work “towards developing Ireland’s petroleum industry”.

“It is unbelievable that the Government would launch these scholarships less than 24 hours after a historic Dáil vote in favour of fossil fuel divestment,” said Green Party councillor Ciarán Cuffe.

“It makes no sense that the Government continues to commit public money to dead industries, when we could be funding Ireland’s renewable future.”

“We know that 75 per cent of known fossil fuel reserves must stay in the ground if global warming is to be limited to two degrees above pre-industrial levels.

“These scholarships show the Government have no interest in playing their part in tackling climate change, and just continue to pay lip service to our international commitments.”

The private member’s Bill on fossil fuel divestment, which was introduced by Independent Donegal TD Thomas Pringle, provides that the National Treasury Management Agency divests itself of its interests in fossil fuel companies.

The Government lost Thursday’s vote on the Bill by 90 to 53.

The following day, the Department of Communications, Climate Action & Environment posted that it was offering scholarships for MSc students focused on topics “of direct relevance to the development of Ireland’s petroleum resources”.

Successful candidates will be offered up to a maximum of €12,000 for necessary course-related costs and funding will come from the Petroleum Infrastructure Programme - Expanded Support group Fund.

“I think it’s important that Denis Naughten, if his commitment to tackling climate change is more than skin deep, should divert this money into research into renewable energies,” Mr Cuffe told The Irish Times.

The councillor also made a comparison between the Government’s energy policies and commitments made by US president Donald Trump to support the petrochemical industry.

“People are rightly lambasting Trump for his actions on climate change this week, gagging the EPA and cutting funding. At least he admits he doesn’t believe the science. This Government pretend to care while quietly carrying on business as usual. That’s just as bad.”

Responding to Mr Cuffe’s criticisms, a statement from the department argued that a limited number of petroleum-related scholarships had been offered to students on an annual basis for many years.

The statement underlined the Government’s commitment to reduce greenhouse gas emissions from the Irish energy sector by 80-95 per cent by 2050 relative to the 1990 level, as laid out in the Energy White Paper.

“Ireland’s transition to a low carbon energy future will involve progressively moving to lower emissions fuels (eg moving initially from peat and coal to gas), and ultimately towards an even greater reliance on renewable energy.”

The statement said the Government had introduced “a range of policy measures and schemes” to encourage the use of renewable energy.

It added that oil and natural gas would remain “ significant elements of Ireland’s energy supply in the transition period” and in that context “the development of Ireland’s indigenous oil and gas resources has the potential to deliver significant and sustained benefits to Irish society”.