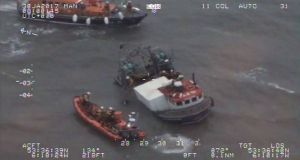 The 12m vessel Atlantic Osprey was holed after drifting on to rocks just south of Balbriggan harbour. Photograph: Rescue 116/Facebook.

The fishing vessel which sank off Balbriggan, Dublin, on Monday has broken up and a salvage team has moved in to remove as much of the debris as possible before it is washed ashore, according to Fingal County Council.

The 12m vessel Atlantic Osprey was holed after drifting on to rocks just south of Balbriggan harbour at about 5am and sank about three hours later. Five fishermen were rescued from the sinking boat.

The salvage team, working on behalf of the owners and insurers, is planning an operation on Thursday to remove what’s left of the boat.

The team has also committed to a clean-up along the coast to remove any debris that has already been washed ashore.

A light film of diesel oil which was spotted in the water on Monday appears to have been largely broken up by the overnight storm and evaporation.

The Irish Coast Guard has predicted that what’s left will remain at sea over the next 18 hours.

Fingal County Council’s Oil Pollution Response Team, which is made up of staff from the Operations, Environment and Corporate Affairs Departments, is continuing to closely monitor the situation along with the Irish Coast Guard.

“Oil pollution response equipment has been moved to a staging area adjacent to Balbriggan harbour and is ready to be immediately deployed if required,” the council said.