Dart Underground could be derailed by plans for office block 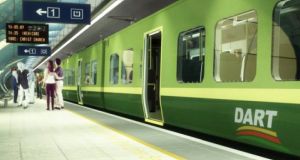 A computer rendition of a Dart Underground station. The 7.6km rail line is to link Heuston Station to the Dart line for the first time.

The State’s €4.5 billion Dart Underground project is at risk because of a developer’s plans to build offices on the site of one of its key stations, Iarnród Éireann has said.

A warehouse off Pearse Street was designated as the site for the station, but Iarnród Éireann was unable to buy it because it did not have Government funding for the line.

Rails Investment Ltd, a Maltese-registered company, has applied to Dublin City Council to demolish a 1930s warehouse it bought last year on Sandwith Street, just off Pearse Street, and replace it with a seven-storey office block.

In a submission to the council in December, Iarnród Éireann said the site was “critical to the construction of the station” and the proposed office block would occupy “ lands necessary” for the station.

It said it was contacted last September by engineers working on behalf of the site owner, yet the planning application made no reference to Dart Underground.

The line remains “a cornerstone” of the Transport Strategy for the Greater Dublin Area 2016-2035, it said. The recently adopted Dublin City Development Plan also contained provisions aimed at protecting the line, it said.

The 7.6km rail line is to link Heuston Station to the Dart line for the first time, with underground stations at Spencer Dock, Pearse Station, St Stephen’s Green, Christchurch and Heuston, as well as a ground-level station at Inchicore.

In November 2011, the project was shelved by the Fine Gael/Labour government. The following month, An Bord Pleanála granted Iarnród Éireann the railway order to construct the line and stations and acquire property necessary for the project.

In September 2015, the previous government published its capital plan and said development of the underground rail line would be postponed until after 2020. Last October, Minister for Transport Shane Ross said the project, along with others such as Metro North, had not been shelved” but were “postponed” during the financial crisis and would now go ahead.

Almost €3 billion of the €4.5 billion costs of the line would have been spent on a tunnel running under the Liffey and the city centre from the north Docks to Inchicore.

In late 2015, Iarnród Éireann reviewed the scheme and said a “lower cost solution” could be achieved by ending the tunnel at Heuston Station and reducing the number of stations along the line, although the Pearse Station remained an integral part of the scheme.

For this reason, the company said it decided not to use its compulsory purchase powers for sites needed for the project, ahead of seeking a new railway order for the line.

Dublin City Council has asked Rails Investment Ltd to respond to Iarnród Éireann’s concerns. The council also said it had “serious concerns” in relation to the height of the proposed office block, which it said was a “visually discordant and jarring element” in the streetscape.