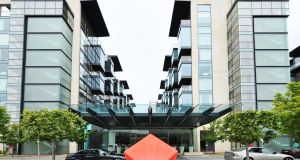 The largest single owner of apartments at Beacon South Quarter in Sandyford plans to vote in favour of a €10 million charge to fix fire-safety and other structural defects at the south Dublin complex.

Owners of apartments in blocks A, B1, C and D at Beacon are being asked by BSQ Management Company Ltd to pay €9.1 million into a sinking fund for fire remedial works.

Residents in blocks A and D are being asked for just over €1 million in relation to water damage.

Owners will be asked to vote in favour of the charges at the management company’s annual general meeting on February 6th.

Ires Reit expects to be charged about €2.7 million of this cost, which a spokesman for the company said it would vote in favour of paying.

However, individual owner occupiers have said they cannot afford the charge and are seeking a vote against the sinking-fund payments.

“Only around 20 per cent of the apartments are owned by owner occupiers, the rest are landlords, but these are huge figures for individual owners to have to pay,” said Killian Ryan, acting chairman of the recently-formed Beacon South Quarter Owners’ Group.

Owners had not yet been presented with individual invoices Mr Ryan said, but he expected the bills would be in excess of €10,000 each.

“The overall sum involved came as a huge shock to most people, and we don’t feel we have been given adequate information on it.

“As individual owners we would be advocating voting against paying, and having an EGM [extraordinary general meeting] at a later date so that people can have time to make an informed decision.”

However, he said he was concerned that a decision of Ires Reit to vote in favour of the charge might make it difficult to secure this postponement.

Beacon South Quarter was built in 2005 by Landmark Enterprises.

They did not make any of the blocks “potentially dangerous buildings” that would require evacuation under fire regulations.

Fire-stopping deficiencies were detected but the report said the risk of fire spreading was “relatively low”.

All the fire doors needed remedial work and the fire alarms did not reach required decibel levels.

While residents have been asked to contribute €1.015 million in 2017 for water damage, a report by surveyors Scott Murphy found this could increase to €13.5 million between insured and uninsured costs.