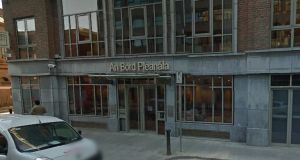 An oral hearing into a proposed retail and residential development in Castleknock opened at an An Bord Pleanála oral. Photograph: Google Street View

A proposed retail and residential development in Castleknock has been conflictingly described as “monstrous” and a “model exemplar” during the opening session of an An Bord Pleanála oral hearing into the project.

The mixed-use site will be anchored by a new Lidl supermarket in what campaigners describe as the historic heart of Castleknock. The plans which also feature a medical centre, smaller shops and eight apartments have attracted opposition from Minister for Social Protection Leo Varadkar and former tánaiste Joan Burton.

In a submission to Tuesday morning’s hearing, Mr Varadkar agreed that the site within his local constituency is appropriate for small-scale residential and retail development, but described the proposed Lidl as being at odds with the surrounding area.

“I don’t think this adds to the appearance of the village in what is, after all, an historic village and architectural conservation area,” he said, also maligning the prospect of “serious congestion” for the surrounding road network should the project go ahead.

The Fine Gael TD further pointed to “very excessive retail space” already in existence in the surrounding Dublin 15 area, including the nearby Blanchardstown Centre. He said the introduction of another large retailer will have “negative impacts” for local businesses.

Ms Burton, also a representative for the area, lamented what she termed the “very large visual intrusion” of the project on the locality, and said development in the vicinity of the Lidl site is coming to “saturation point”.

She finished her submission by appealing to An Bord Pleanála to “save the integrity of the village”.

Fianna Fáil TD Jack Chambers questioned the applicants’ methods of calculating the impact the development will have on traffic, saying it will lead to gridlock and “off-the-Richter” consequences in terms of congestion.

He described the planned Lidl and accompanying buildings as a “monstrosity” which, he said, “puts an atomic bomb under the conservation area as we should see it”.

Across a number of detailed presentations at Tuesday morning’s hearing, those behind the Lidl-anchored project sought to contrast it to another retail and residential vision for the area known as ‘Uxbridge’ which also courted controversy when it was granted planning permission in 2011.

Planning consultant Ray Ryan said that while ‘Uxbridge’, which never went ahead, covered twice the ground area of the Lidl plans and included buildings of up to five and six stories in height, the new proposed development would not be of the same scale or density.

As opposed to Mr Varadkar’s views on the matter, he said Castleknock currently suffers from a “deficiency of shopping, particularly convenience shopping”, and said the site in question is “ideal” for retail development.

Lead architect Gerry Murphy said the plans are a “model exemplar of how to do residential in a village setting” that will provide “opportunities for great vitality” in the area.

Giving “conservative” estimations on traffic levels, chartered engineer Philip Lee accepted that volumes at the adjoining junction will be over capacity due to the extra numbers visiting the Lidl but said this is “typical of junctions on arterial routes” such as the Castleknock Road.

The oral hearing will also receive submissions from Fingal County Council, which granted permission for the project in September, as well as local councillors and residents’ groups over Tuesday and Wednesday.