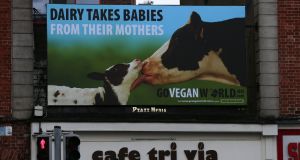 The organisation behind a high-profile vegan billboard advertising campaign has been accused of being a “secret society” and lacking in transparency by the Irish Farmers’ Association (IFA).

IFA president Joe Healy criticised the lack of transparency around where the company’s income comes from and who was funding the campaign.

“It seems extraordinary that a multimillion euro advertising campaign across Ireland and the UK would be run from an obscure animal sanctuary in Ireland,” he said.

“They need to stop being a secret society and tell the public who is funding them.” The company was not a registered charity and did not disclose where its income came from, Mr Healy said.

Eden Farmed Animal Sanctuary describes itself as a not-for-profit company that provides a home for 200 “non-human animals who are rescued from animal-use industries”, who were now “free from subjugation, exploitation and killing”.

Sandra Higgins, who is a director of both Eden Farmed Animal Sanctuary and Go Vegan World, said neither company published the names of donors due to data protection laws and “out of respect for donors’ wishes”.

Ms Higgins declined to provide a breakdown of what proportion of the companies’ funding came from outside of Ireland.

“The identity of our donors and the details as to how much funding comes from outside Ireland is irrelevant to our work,” she said.

“In our culture where everything has a monetary value it is difficult to conceive of a purely altruistic motive. Yet concern for animal rights without public credit is exactly the motive of those funding Go Vegan World and Eden Farmed Animal Sanctuary,” she said.

Those donating to the two companies did so because they “share our moral conviction that it is wrong to use and kill other animals”, she said.

The companies were not registered as charities as their activities “do not fit within the definition of a charitable organisation” in Ireland, she said.

The farmers’ group had complained to the Advertising Standards Authority of Ireland (ASAI) about the advert, but were informed it was outside of the authority’s remit, he said. “I think the public deserve to know who is funding these campaigns,” Mr Healy said.

In response Ms Higgins said the animal rights group would be happy to discuss the future well-being of the IFA’s membership with the association.

“We would be interested in asking them how they intend looking after their farmers when animal agriculture collapses, as it inevitably will,” she said.

Ms Higgins said Go Vegan World would be willing to assist farmers in any way possible to “transition from animal agriculture to an alternative, sustainable and ethical way of making a living”.