The Greta Thunberg effect: ‘Hero and villain’ of 2019 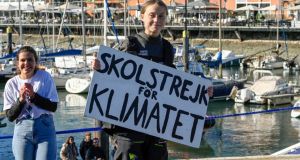 Thunberg shows the placard ‘School strike for the climate’ upon her arrival in in Lisbon on December 3rd after crossing the Atlantic by boat. Photograph: Horacio Villalobos/Getty

Two hours before what climate protestors hoped would be their biggest Friday protest in the US, people were streaming into Foley Square in Lower Manhattan. It was late September.

Swedish teenager Greta Thunberg had crossed the Atlantic in a boat powered by sail and solar energy and landed on their doorstep. Her stark message on an overheating Earth had dominated daytime television and culminated in a visit to Congress; climate deniers were irked.

A small rally was held but without their star motivator. Then the march started. People were ushered towards City Hall Square. Suddenly, this observer found himself close to the head of the march. A banner the width of the adjoining street was rolled out.

On quick perusal, there was no sign of Thunberg. A second scan: she was to be seen close to the front of the group, walking quietly with her famous placard skolstrejk för klimatet (school strike for climate) under her arm.

Unlike chanters around her she was silent – with little hint of the global climate warrior that she had become in just over a year.

The crowd turned right at City Hall Square, which itself was thronged. With people joining from side streets, it was clear New York had stood up. It took two hours for the march to reach Battery Park.

All told, some 400,000 turned out. Thunberg took to the stage for the main rally, quickly revealing her steely side: clear demands justified by climate science, no platitudes.

Ever since her first lone protest outside the Swedish parliament on a Friday, that message has been delivered to parliaments across the world, at Davos to business leaders and to gatherings of peers.

Next day a youth climate summit at UN HQ was attended by 900 delegates. Thunberg openly talks about her Asperger’s syndrome – one of the qualities that helps her speak when she feels she has something to say. That day she did not want to say much but to give voice to others.

Some 48 hours later at the first UN climate summit attended by more than 100 world leaders, she had something to say – a blistering “how dare you!”

The short, sharp message was the same as usual but her tone was different, her message infused with emotion and anger. It was the pinnacle of her efforts, her opportunity to stare down global leaders. “The world is waking up,” Thunberg told them. “And change is coming whether you like it or not.”

She condemned the neoliberal obsession with growth and profit: “We are in the beginning of a mass extinction. And all you can talk about is money and fairytales of eternal economic growth.”

It prompted some to question her wellbeing. Some asked if she was being manipulated. One contributor to Fox News, the US president’s favourite TV channel, called her “a mentally ill Swedish child who is being exploited by her parents and by the international left”.

In an attempt to steal the thunder of the summit, Trump had convened a conference on religious freedom at the same venue. They briefly crossed paths as he entered the building and she was passing through the lobby. She delivered an icy glare in his direction; he bounded onwards obliviously.

Thunberg avails of the most up-to-date science. Her mother, Malena Ernman, is an opera singer. Her father, Svante, is an actor and author – a liberal upset by the climate crisis. But the motivation is primarily hers; they tried to dissuade her from mounting the initial protest. The global FridaysForFuture movement stemmed from her own doggedness.

New York’s protest was exceeded a week later when half a million people took to the streets of Montreal with Thunberg. She then appeared at numerous protests in US cities, intending to make her way over land to Santiago, Chile, for the annual UN climate talks. Civil unrest led to a relocation to Madrid. Plan B: return to Europe via catamaran taking the less treacherous southern route to Lisbon.

At that point Thunberg and her father were four months away from the routine of home. They had received some help from activists, but there was no entourage, no personal security. The family have refused financial assistance; she donates any prize money she receives.

During that arduous trip there was intense speculation she was about to win the Nobel Peace Prize. Climate blogger Eric Holtaus questioned if radicalism was a factor in her not being awarded it. She demands, for instance, that the world become carbon neutral by 2030 – an immense ask requiring dramatic transformation of economies.

I’m not travelling like this because I want everyone to do so. I’m doing this to sort of send a message

“Greta has galvanised the world’s attention on the most important problem in human history in a way that no one has ever done before,” says Holtaus. “She has become both a hero and a villain, depending on your willingness to accept the blunt truths she tells. Her critics say her approach is too confrontational, too divisive.”

The impact of her message, however, cannot be denied. Dr Declan Fahy of DCU, a specialist on environmental communication, believes Thunberg has had multiple effects on public understanding of climate change.

“She has drawn media and public attention to the issue. She provides a much-needed human dimension to climate change, which is so often told in a way that stresses the measurement of emissions, or the likelihood of projected future climate scenarios, or the impacts that will be felt in faraway places.”

She has successfully portrayed climate action as a moral issue, says Fahy. “She is a teenager, who is not representing an organisation’s agenda, and who has a deep stake in the issue as it concerns her future. When she speaks about climate change, she is authentic, credible, and trustworthy.”

Weight on her shoulders

Some of this is down to how she connects with people; she speaks about her own anguish and anger which makes what is at stake understood and felt at an emotional level. “That is very powerful. It meant she was able to cut through a lot of noise and capture attention in a way that felt real and true to people,” Fahy notes.

As for negative reaction, climate politics has always been nasty and divisive, Fahy says, and “it’s a big weight on her shoulders, being a teenager”. On the other hand, her ability to mobilise using social media is remarkable.

Recently, she posted on Instagram: “The endless conspiracy theories and denial of facts. The lies, the hate and the bullying of children who communicate and act on the science. All because some adults terrified of change – so desperately don’t want to talk about #climatecrisis. This is hope in disguise. We’re winning.”

On landing in Lisbon, she declared: “I’m not travelling like this because I want everyone to do so. I’m doing this to sort of send a message. That it is impossible to live sustainable [sic] today. That needs to change. We cannot require people to sail you across an ocean like this. That is absurd.

“Everyone has to do everything they can in order to make sure they are on the right side of history.”

In the meantime, Thunberg continues to dictate the course of rapidly unfolding environmental history.