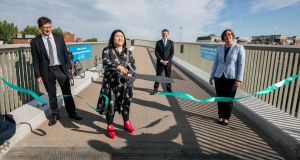 Eamon Ryan TD, Lord Mayor of Dublin Hazel Chu and Paschal Donohoe at the opening of the new cycling route.

A 750m long cycle path has been opened along the Royal Canal in Dublin’s North Strand at a cost of nearly €9 million.

The stretch is part of Dublin City Council’s Royal Canal “premium” cycle route, a 7km path running from the north quays to the city’s border with Fingal at Ashtown.

The first section of the route, a 500m stretch from Guild Street at the north quays to Sheriff Street, was completed more than a decade ago, but despite several announcements, work on the second phase to bring the path to Newcomen bridge at the North Strand only began in February of last year.

The newly opened section costing €8.9 million, consists of a segregated three-metre wide cycle track and two-metre wide footpath on a viaduct bridge alongside a linear park. The project also involved the realignment of the junction of Seville Place, Guild Street and Sheriff Street Upper and the provision of a pedestrian and cyclist crossing at its entrance with North Strand Road.

Speaking at the opening of the new section, Minister for Transport Eamon Ryan said while most cycling infrastructure was inexpensive to install, this project had required the construction of a bridge.

“Sometimes you come to pinch points and in that pinch point you need a solution. The vast majority of cycling infrastructure is very, very cheap, but sometimes you do have to spend money on bridges or critical pinch points so we get a solution that is non-stop end to end,” he said. “I think that money is well spent.”

The majority of the canal was going to be “very cheap” he said “because you have a natural tow path so in most instances its not going to be expensive”,

The next phase of path will run from North Strand to Cross Guns Bridge at Phibsborough. A tender for this 2.1km section is expected to be issued by the end of this year.

The final section, a 4.3km path from Phibsborough to Longford Bridge in Ashtown, has been divided into four phases, the first involving a contra-flow bus lane over Broombridge due to be completed by October. The remaining phases are at design stage, Dublin City Council said.

Minister for Finance Paschal Donohoe said while the completion of the route to Ashtown was due to take up to two years, he hoped it would open in six months.

A 2km section from Ashtown to the 12th lock in Castleknock was completed by Fingal County Council in 2015.

The canal path is part of a a 277km coast-to-coast cycling “greenway” from Galway to Dublin, announced in 2012 by the then minister for transport Leo Varadkar. It was due to be completed in 2020. The section from Maynooth to Longford has been finished.

Separately, Dublin City Council is to extend the hours of pedestrianisation of a number of streets surrounding Grafton Street to 11pm this Saturday, Sunday and Monday, following the success of the measure last weekend.

Parts of South William Street, Drury Street, Dame Court, South Anne Street and Duke Street were pedestrianised from 11am to 7pm last weekend. Surveys of businesses on these streets found takings were up by 40 per cent to 100 per cent.

If the extension to 11pm results in “a positive outcome” it will remain in place for the weekends of August 8th and August 15th, the council said.