Over two-thirds of regional roads in state of disrepair, audit shows 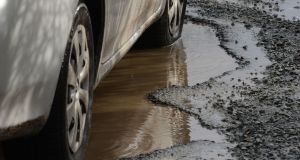 The amount of money devoted to improving regional roads fell by €3 million to €45 million in 2016. Photograph: Cyril Byrne

Over two-thirds of regional roads across the country were recorded as being damaged in 2016 but money spent by councils on repairs declined that year, according to a new report.

An appraisal of the performance of local authorities by the National Oversight and Audit Commission found that 30 per of regional routes reviewed across the country in 2016 had “few or no defects”, while the other 70 per cent showed signs of wear and damage.

Monaghan had the highest proportion of regional roads in a state of severe disrepair at 15 per cent, whereas regional roads across the Dublin authorities were in comparatively good condition, particularly in Dublin City where 82 per cent were deemed to have little or no defects.

The amount of money devoted to improving regional roads fell by €3 million to €45 million in 2016, and the road maintenance budget also fell for authorities across the State.

The 308km of roads strengthened that year was 15 per cent less than the total for 2015 and maintenance works were carried out on 351km of roads, slightly more than in 2015.

Much of the local road network was also found to be in a state of disrepair with structural distress and cracking evident across half of roads in Mayo, while almost half of all local primary roads in Cork and Galway had surface defects.

The commission found 13 of 31 local authorities reported budget deficits in 2016, down from 16 the previous year.

Sligo County Council continued to have the largest deficit of almost €24 million, although this was reduced from close to €26 million in 2015, while Dublin City Council recorded the largest surplus at €26 million.

There was a noticeable upswing in construction activity with just under 13,000 new buildings notified to local authorities in 2016, an increase of 37 per cent compared to 2015, and councils issued 4,000 more planning decisions over the same period.

Louth had the poorest rate of local authority rent collection at 71 per cent compared to 97 per cent in Tipperary, and almost a third of commercial rates went uncollected in Louth and Donegal.

Levels of brown bin use for compostable material varied wildly across the State, with collection rates ranging from 80 per cent of households in Fingal to just over 1 per cent in Donegal.

Library services were unevenly resourced around the country, and the per capita spend of €46 on libraries in Longford was over double that of Laois. On average, people in Longford visited local libraries on more than five occasions in 2016 compared to three visits per person in Laois.