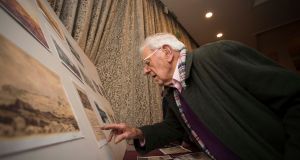 Ken Homan from Dalkey at the public meeting at the Royal Marine Hotel in Dún Laoghaire on a scheme for Bulloch Harbour that would include apartments, houses, a cafe and a building workshop. Photograph: Tom Honan

A new plan to redevelop Bulloch Harbour near Dalkey in south Dublin has been dismissed by local opponents as “in some respects worse” than an original design rejected by planners a year ago.

A public meeting took place on Tuesday night aimed at rallying opposition to the development, which Bartra Capital Property Group is behind.

The company, founded by developer Richard Barrett, has revised its earlier plan and hopes to secure permission from Dún Laoghaire-Rathdown County Council for a scheme that would include two apartments and three large houses. It would also provide a building workshop for “traditional timber boats”, a public square, a cafe, community changing facilities and new units for existing businesses, including boat rentals.

Despite the developer’s insistence it addressed issues arising from its previous application, opponents say they remain concerned about potential flooding, wave over-topping and a scale of build considered “a gross intrusion” to the existing area.

“Unfortunately, this new application is in some respects worse than the one refused by the council,” said the Bulloch Harbour Preservation Association (BHPA) which organised the meeting, attended by about 250 people.

Its members believe the new application “pays virtually no attention to the special character, heritage and history of this small working harbour”.

Those who attended the meeting in nearby Dún Laoghaire were shown a presentation on the history and heritage of the harbour, an aspect of the campaign against the development that inspired many of the near-300 original objections.

Des Burke-Kennedy, a member of the Dalkey Community Council, told the gathering the area was not suitable for residential development due to a health and safety “risk of the highest level” posed by giant waves and flooding.

“When planners turn things down they don’t do it lightly,” he said.

BHPA chairperson Dr Susan McDonnell told the meeting they were concerned that a private development could erode the popular use of the area.

“It’s a working harbour, one of the few that remains along the east coast,” she said. “It’s really well used and it’s something that should be protected. It’s what gives the harbour its life and its appeal.”

In a previous statement, Bartra’s development and construction director Grainne Hollywood said the new submission followed “considerable engagement” with members of the council, the community and stakeholders.

“Bartra and its expert team of property professionals have given careful consideration to all the issues raised in Bartra’s previously unsuccessful application for this site,” she said.