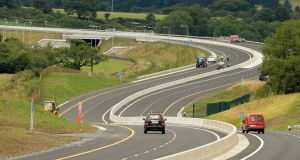 National roads operator Transport Infrastructure Ireland has been forced to cut its allocation for salt purchases this year, the authority’s chief executive has said.

Michael Nolan also told the Oireachtas Transport Committee that an unopened motorway service station is costing it €19,500 per month in security costs.

He said the annual budget for road maintenance in 2018 would have to be “substantially cut” to almost half of what it was ten years ago, down from €58 million in 2008 to €31.6 million.

The road operator has written to all local authorities to alert them to the fact that budgets for this year would reflect the cut. He said the authority had been forced to “reduce our provision for salt purchases for 2018”. While he said salt levels were currently adequate, the situation would be “reviewed after the winter season”. Any reduction in salt purchasing could impact on the amount of salt available for de-icing the State’s roads later this year and in early 2019 .

He added that the authority was suffering ongoing costs of €19,500 per month to provide security on an unopened motorway service area about 10 kilometres north of Gorey in Co Wexford. Mr Nolan told the committee a legal dispute had held up the opening of the service area which had so far cost the authority €600,000 for security and lighting and €575,000 in legal costs. But he said he was confident that the issue would be sorted before September when a contract with a concessionaire would be signed and fit-out would take about five months.

Responding to Committee Chairman Fergus O’Dowd who said some motorists on the M1 toll road had been charged twice, Mr Nolan said the overcharging had applied to 2,000 motorists who hold tag accounts on the M1 motorway. The overcharging had occurred when motorists who left the motorway returned within three hours, and were incorrectly charged a second time. The toll bye-laws stipulate that motorists should not have to pay twice, where the journey was resumed in the same direction as the original journey.

The overcharging appeared to have been occurring as the operator engaged in an upgrade of the toll collection system which has been underway since April 2017, he said. Mr Nolan said the total amount of overcharging was €6,000.

However Mr O’Dowd said he was concerned “so much public money” was being wasted on the unopened motorway services “when one cup of tea or one bar of chocolate has been consumed”.

Mr O’Dowd also said Transport Infrastructure Ireland “has failed to collect €10 million in toll charges” on the M50. He said the authority had written off €5.2 million in 2016 and €4.9 million the year before because of “people who don’t pay”. But the authority was penalising compliant motorists who left the M1 at Gormanston, he said. Mr O’Dowd said this was “completely unacceptable”. He said some errors on the M1 toll scheme were discovered in April 2017 and didn’t seem to be discovered until he reported it in January 2018. He said he had knowledge of motorists who did not have a tag, being asked for commercial vehicles rates at barriers. He said motorists trust was vitally important and this was being lost.

Niall O’Neill of TII replied the amount of unpaid toll written off in 2017 had fallen to €3.56 million, just 2.4 percent of toll revenue.