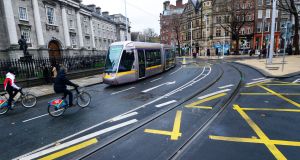 Plans for a €10 million traffic-free plaza at Dublin’s College Green are “dead” following the rejection of the scheme by An Bord Pleanála, Dublin City Council chief executive Owen Keegan has said.

The council 18 months ago sought permission from the planning board to build the pedestrian and cycle plaza and ban all traffic, including buses and taxis, from accessing Dame Street through College Green.

But the board on Wednesday announced it was refusing permission for the project due to the adverse impact it would have on bus transport and traffic in the city.

Taoiseach Leo Varadkar said he was “disappointed” at the news, adding in a Twitter post that he hoped the council “can work up a revised proposal”.

However, Mr Keegan has said “this scheme is dead” and that it is “too early to decide” what further steps the council might take.

Mr Keegan said he was “very, very disappointed” by the decision, which would have implications for the efficiency of the Luas Cross City line, particularly when additional longer trams are added to the service.

The “conflicting” movements of traffic in College Green, with buses and taxis traversing the Luas line, had been the primary reason for seeking a traffic-free plaza, Mr Keegan said.

“The primary reason for the plaza was that we have always believed we could not accommodate the successful operation of Luas with all those conflicting traffic movements, apart from the environmental impact of having a very congested city centre,” he said.

“If Luas capacity goes up and if we restore the level of priority I want to give to pedestrians, that’s bound to lead to higher congestion which will have implications for all road users in that space.”

Mr Keegan said he recognised the plan would have meant adverse impacts on bus services, but said the “major positive benefits” would have outweighed the downsides.

“There are always going to be winners and losers, the judgement is whether on balance society on a whole benefits and in this case the board have taken the view that it doesn’t.”