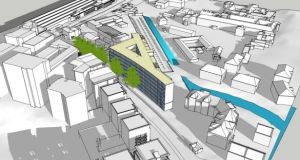 Serious concerns were raised by Dublin City Council over plans for a new €80 million Garda command and control centre near Heuston Station and the Irish Museum of Modern Art (Imma) in Dublin, it has emerged.

The Office of Public Works (OPW) said it will issue within weeks its long-awaited decision on whether to go ahead with the six-storey complex at Military Road in Kilmainham.

However, concerns had been raised by the council, as well as local politicians and resident groups, in relation to the environmental and traffic impacts of the development.

The Garda has to leave its current premises on Harcourt Street, where its high-security and specialist Garda operational units are based, when its lease on the building expires in 2022.

Last December, the OPW submitted plans to the council for the development of a new Garda security and crime operations centre, to replace the Harcourt Street facility, on a two-acre site at the corner of St John’s Road and Military Road.

However, unlike normal planning applications, the council does not make the determining decision but can make recommendations. The decision will be made directly by the OPW’s board of commissioners and it cannot be appealed to An Bord Pleanála.

The public may also send observations to the OPW.

In March, the council wrote to the OPW to raise “serious concerns” about transport plans for the development.

It said that, despite being beside a “major public transport hub” with main rail, Luas, bus and Dublin bike facilities, a “serious overprovision” of car parking spaces had been included in the plans, which “seriously conflicts” with council standards.

The OPW proposes two storeys of underground parking with 220 car parking spaces. Under the development plan a maximum of 26 spaces should be permitted, the council said.

The plans would see vehicles accessing the car park from the narrow Military Road. While any vehicular access from Military Road would be “undesirable”, the council said, the quantum of parking proposed made it “unacceptable”.

The national cycle network plan required space for a “greenway” route linking to the Camac River through the site. No provision had been made for this route, despite being part of a statutory plan, the council said.

Green Party councillor Ciarán Cuffe, in his submission to the OPW, said the planned parking exceeded the maximum allowed “by a factor of 440 per cent”.

He said while he accepted employees may have to work antisocial hours, the “over-supply of car parking must be reconsidered”.

Mr Cuffe also raised concerns about the fate of two protected structures on the site, a gate lodge and the Deer Park Wall, part of the Phoenix Park until the 1670s.

Residents’ group Kilmainham Inchicore Network said the development conflicted with council policies to create a “green linkage” through the site, and would prevent potential links to Imma, Kilmainham Gaol and other historic sites in the area. It also raised concerns about the protected structures, and the parking and traffic implications.

A spokeswoman for the OPW said a decision on the development “will be made within the coming weeks” but would not say if the plans would be altered in line with the council’s , or other, submissions.