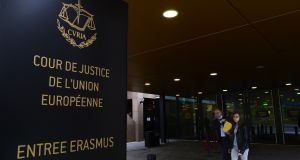 The European Court of Justice: The EU says that it has a “number of concerns” about the independence of members of Ireland’s Marine Casualty Investigation Board. Photograph: John Thys/AFP/Getty Images

The European Commission has referred Ireland to the EU Court of Justice for failing to uphold EU law on “impartial” investigations of marine incidents.

The EU says that it has a “number of concerns” about the independence of members of the Marine Casualty Investigation Board (MCIB), the State’s lead investigating body for serious incidents at sea.

The presence of the Department of Transport’s secretary general or nominee, and the Marine Survey Office’s chief surveyor on the five-person board could represent a conflict to interest, according to the European Commission.

It says the board “lacks the necessary independence” from the Department of Transport and the Marine Survey Office (MSO).

The MCIB was established in June 2002 under section 7 of the Merchant Shipping (Investigation of Marine Casualties) Act, 2000.

It is currently handling 13 inquiries, dating back to early 2016, including the investigation into the death of Irish Coast Guard Doolin volunteer Caitríona Lucas off the Clare coast in September, 2016.

The board is chaired by barrister Cliona Cassidy, and includes chief surveyor Brian Hogan.

The MCIB website states that it complies with the International Maritime Organisation’s casualty investigation code and a 2009 EU directive on investigating “accidents in the maritime transport sector”.

However, the European Commission says Ireland has failed to “correctly implement” the 2009 directive.

The directive requires that each member state establishes an “impartial permanent investigative body, which should be independent in its organisation, legal structure and decision-making of any party whose interests could conflict with the task entrusted to it”.

The EU notes that the MSO has “regulatory, administrative and enforcement functions with regard to ships, their equipment as well as seafarers’ competence”.

The MSO is responsible for certifying vessels which may be subsequently involved in incidents at sea.

“As for the Department of Transport, Tourism and Sport, it is responsible, inter alia, for maritime safety policy,” the commission says.

The Department of Transport said in response that it “noted” the decision by the European Commission to refer Ireland to the Court of Justice and said “the matter is now subject to further consideration”.

It was unable to state if the EU move would affect continuing investigations.