No Sandymount cycle path until 2026 if alternative plan pursued – council 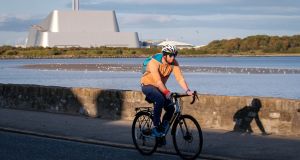 Cyclist on Strand Road, Sandymount: A two-way cycle route is due to come into operation next month for a six-month trial. Photograph: Crispin Rodwell

The Sandymount coast would be without any cycling facilities until 2026 “at the earliest” if an alternative to Dublin City Council’s Strand Road cycle route is pursued.

A two-way cycle route on Strand Road, which will see traffic limited to one lane with cars allowed to travel outbound only to the Merrion Gates, is due to come into operation next month for a six-month trial.

However, local councillors on Monday passed a motion calling for Minister for Transport Eamon Ryan and the National Transport Agency (NTA) to revisit a 2015 plan to construct a cycle path on a boardwalk over the sea side of Strand Road, instead of on the road itself.

This plan, which was projected to cost €48 million, involved the closure of the Merrion Gates level crossing to traffic and the construction of a two-way traffic flyover between Strand Road and Merrion Road over the rail line and through the car parks of Merrion Hall and Our Lady Queen of Peace church.

The plan met widespread local opposition and was shelved by the NTA in 2018.

Brendan O’Brien of the council’s transportation division on Monday told councillors he did not have any issue with the council writing to Mr Ryan. However, he pointed out the proposal had met “a lot of opposition” locally.

Since the 2015 proposal, the council had begun planning flood defences for Sandymount which would have to be integrated into any new plan, he said. In addition, the council would have to prove there was no alternative to building over the Dublin Bay biosphere.

“Any interference in going into the bay, particularly in our area with the high designation that this particular area has, can only be done based on the principle of no other possible alternative and an overriding need.”

Even if the council could establish there was no viable alternative to the boardwalk, it would be several years before the facility could be put in place, Mr O’Brien said.

“It would be highly unlikely we could put any cycling facilities in place much before 2026, at the earliest, provided we get through planning and provided we could make the environmental case to go into the protected bay.”

The motion proposed by Fine Gael councillors Paddy McCartan and James Geoghegan, Labour’s Dermot Lacey and Fianna Fáil’s Claire O’Connor also noted a number of local residents groups plan to seek an adjudication from An Bord Pleanála on whether the Strand Road project requires planning permission. However, the motion did not seek the trial to be paused until the board had issued a decision.

The council said the cycle path was exempt from requiring planning permission and the project was in line with Government advice to implement walking and cycling schemes during the Covid-19 pandemic.