Car curbs at Grangegorman in Dublin to be made permanent

Funding to facilitate more cycling and walking more than doubles to €7.6m 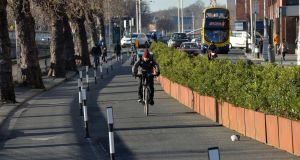 The work will be funded as part of a €7.6 million plan to improve walking and cycling safety in Dublin city this year. Photograph: Alan Betson

The closure to through traffic of the main road outside the new TU Dublin campus at Grangegorman, to improve cyclist and pedestrian safety, is expected to be made permanent by Dublin City Council.

Councillors will be asked on Tuesday if they wish to extend the trial, due to end this month, of the “filtered permeability” system at Grangegorman Lower, which uses bollards and temporary planters to block cars but allow cyclists to pass.

However, the council is already preparing to make the project permanent as 60 per cent of respondents to a public consultation process supported the trial; cars that were travelling at 60km/h – twice the legal limit for the road – had reduced their speed to 37km/h; and the move had stopped rat-running to the quays.

The work will be funded as part of a €7.6 million plan to improve walking and cycling safety in Dublin city this year, more than double the 2020 fund to encourage “active travel” during the pandemic.

The National Transport Authority (NTA) fund will also cover infrastructure for the implementation of the Strand Road cycle path in Sandymount. The largest tranches of NTA funding will be spent on preventing people from parking outside schools and on the provision of secure on-street parking for bicycles.

The council began the Grangegorman trial last July. The measure “results in the elimination of motorised cut-through traffic from Grangegorman Lower and drivers are no longer able to use this route as a shortcut from North Circular Road to the Quays,” the council said. The project “creates a safer and more liveable area for local residents and a safer space for the thousands of pedestrians and cyclists” who will be attending the university as well as two schools.

The city council has set aside €150,000 to make the scheme permanent. “Feedback on the trial has been broadly positive and, as such, it is expected that these measures will be extended until September 2021, when it is anticipated that a decision will be made to make these measures permanent,” it said.

The local authority also plans to spend €200,000 to establish the segregated two-way cycle route on Strand Road in Sandymount. The route, which limits traffic on the coastal road to one lane, is due to open in February for a six-month trial.

“Providing segregated cycle facilities along this section will enable both commuter and leisure cyclists to be protected; it will reduce the traffic levels and will allow the connection from the city centre to the Dún Laoghaire-Rathdown County Council boundary to be also put in place,” the council said.

The two largest sums of money, €1.4 million each, will be used for school safety and bicycle parking measures. Last year the council began installing pencil-like bollards outside primary schools to stop people parking close to the school gates, particularly on footpaths. The council hopes to extend the scheme to all schools.

It also plans to install 300 “bike bunkers” or on-street lockable bike storage units, particularly for use in residential areas where householders don’t have their own storage facilities for bicycles.

Some €400,000 will be spent on installing sensors at traffic lights so buttons don’t have to be touched to call the green man. Smaller sums of money will be used for the installation and upgrade of pedestrian crossings and cycle lanes across the city.