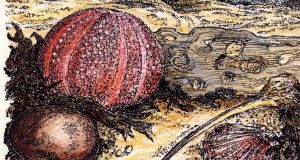 Landings of exotic nuts are examined at length in the latest bulletin of the Irish Biogeographical Society. Illustration: Michael Viney

The daily rotation of Earth is enough to drag the sun across the sky and whirl the winds of the north Atlantic from west to east. They pull waves along with them and urge floating bits of the terrestrial world across the sea to Ireland.

The arrival of sea beans and other Caribbean fruits at our western tidelines has been noted and discussed for centuries, but landings of exotic nuts are examined at length in the latest bulletin of the Irish Biogeographical Society. This collects the findings of a group of scientists who study how species came to be where they are. A bumper issue of the bulletin is otherwise concerned with the alien slow worms of the Burren, water-stick insects of Co Waterford, the distribution of Irish jumping plant-lice, and more.

Not that washed-up walnuts, nutmegs or Brazil nuts can be expected to have much of a future at the chilly tidelines of Connacht. In recent years, some of the first two were discovered on the shoreline of Co Clare by Fanore beachcomber Liam McNamara,

Brazil nuts have occasionally washed up in Ireland and elsewhere in northern Europe, including two in Cornwall in 2014. They have usually been regarded, says Co Kerry marine scientist Declan Quigley, as local refuse. But he now considers “the possibility that at least some of the NW European records may have been true Atlantic peregrine drifters”.

The Persian walnuts, Juglans regia, stranded at Fanore in 2017, were the first such flotsam to be recorded in Ireland. Many of their trees, however, already exist on land. One of the oldest walnut trees in Ireland is “a massive specimen” thought to have been planted around 1760 at St Mary’s Priory in Tallaght, Dublin. Split apart by lightning in 1795, it “still produces nuts in abundance”.

Were those washed up at Fanore thrown out somewhere with Christmas rubbish? Or did they drop naturally and were borne seawards in a flood? Their maximum floating time under test conditions in sea water is 15 months. Dr Quigley estimates the time taken for objects to drift from the southeast US to Europe is at least 14 to 18 months. So they could, he thinks, be true trans-Atlantic drifters, “most likely from the Atlantic coast of Mexico”.

The 23 nutmegs gathered from various Co Clare beaches last summer came from evergreen tropical trees, usually up to 15m tall. These produce yellow flowers, then pear-shaped, fleshy fruits containing a single, shiny, purple-brown seed cupped in a rosy skin. The seed is the nutmeg and the skin the gentler spice we call mace.

Indigenous to rain forests on the spice islands of Indonesia, nutmeg trees are now grown commercially in the tropics worldwide, including Central America and the Caribbean. The husks split open naturally, but how well do fallen nutmegs float? Dr Quigley bought some of Indonesian origin from two Irish supermarkets and found that, like others tested by scientists, they sank immediately.

Traders in nutmegs sort the weightier sinkers for the market and discard the floaters. Most of Co Clare’s stranded nutmegs sank, suggesting a local retail origin. Floaters can be buoyant for more than four years, so some rejected in the Caribbean could reach western Europe. Genetic investigation, grants Dr Quigley, “might lend some support to the peregrine hypothesis”.

Where does that leave the Brazil nuts? As Amazonia’s biggest trade with the world, the fruits are mostly still collected from the rain forests and split with machetes to extract the nuts in their hard shells.

In the 1960s, hundreds came ashore on beaches around Dingle, Co Kerry. They were judged by botanist Charles Nelson, in his 2000 botanical handbook Sea Beans and Nickar nuts, as clearly part of lost maritime cargo. Other occasional and solitary strandings have been noted since the 1990s.

Once again, discarded “floaters” from the Amazon seemed possible, but Dr Quigley’s desire to make his own flotation tests were frustrated. An EU health concern with fungal aflatoxins has changed import of Brazil nuts from the whole shell to packets of the kernel nut. Touring supermarkets hopefully on the eve of Halloween, he was denied any hard-shell test material.

My own beachcombing years have yielded a dish of leathery sea beans, scattered from the pods of tropical lianas. Each was found and prized, as is the beautiful globe of a sea urchin, shorn of its spines and delivered on a gentle tide.

The dish of beans is crowned by a pointed, fibrous husk the size of a grapefruit that I picked up on a lonely beach on the Inishkea Islands. A tropical box nut, Barringtonia asiatica, it could, said Dr Nelson, have floated for up to 15 years. He thought it a genuine drift-seed and the first on Irish record.

Dr Quigley has noted a couple since then, found in Cornwall and East Sussex, but I still feel a dart of pleasure at my small contribution to biogeography.