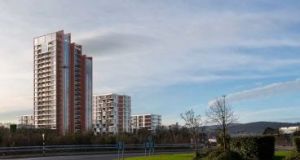 A mock-up of the proposed development on Golf Lane.

Plans for a 22-storey apartment block in Carrickmines in south Co Dublin, which would be one of the tallest residential buildings in the State, have been lodged with An Bord Pleanála.

Bowbeck DAC wants to build 482 apartments in seven blocks ranging in height from four to 22 storeys at a site on Golf Lane, just off Glenamuck Road and immediately south of the M50.

The development would be opposite an estate of three-storey homes.

John Spain Associates, planning consultants for Bowbeck, said the 22-storey tower included in the proposal was “bespoke, site specific, and carefully considered”, and pointed out that An Bord Pleanála had recently refused permission for a development on the same site as it had not included a “landmark building”.

However, local residents have described the proposal as “monstrous” and said the density of the planned scheme would stretch local services such as doctors and schools beyond their capacity.

At 22 storeys the proposed tower would have the same number of floors as the State’s tallest building, Capital Dock at Sir John Rogerson’s Quay.

The 6.3-acre Carrickmines site that is the subject of the plans was until 2014 occupied by six detached houses, but these were demolished without planning permission by a previous owner of the site.

John Spain Associates said the site was suitable for high-density development given its proximity to a “range of services and amenities, both existing and permitted . . . [and it is also proximate] to high-capacity, high-frequency light rail services from the Ballyogan Luas stop”.

The 22-storey building responded “to the site’s prominent location on the M50 corridor” and addressed the previous reasons for refusing permission for development, “wherein the board’s inspector noted that the site demanded a landmark architectural approach which avoids monolithic, repetitive design”, the consultants said.

In late 2018 An Bord Pleanála refused permission for 250 houses and apartments in blocks of four to six storeys at the site, saying the scheme was unsuitable given the site’s location in the “built-up area of Carrickmines”.

“It is considered that the proposed design strategy as it relates to height and design does not provide a landmark building which is considered necessary in order to achieve the optimal architectural solution for this strategic gateway site,” the board said at the time.

However, local residents said the new proposal did not respond to local needs or reflect the size of the site.

“The development will consist of one of the tallest buildings ever to be built in Ireland on an extremely small piece of land that backs onto a quiet country lane,” Dearbhla Meaney, who lives opposite the site, said.

“A development of the proposed size does not have sufficient services in the area to cope with the increased demands it will bring – public transport is poor anyway, with the Luas at max capacity and a very limited bus service in the area. Schools and creches already have waiting lists and other services like GPs and dentists are full, with no capacity to take on new patients.”

Dún Laoghaire-Rathdown County Council had previously refused permission for 109 apartments on one-third of the site on the grounds this density would be “excessive for this outer suburban site”. However, under subsequent planning rules, large-scale residential applications are now made directly to An Bord Pleanála.

This new scheme would be “a monstrous residential development on a tiny plot of land in south Co Dublin”, Ms Meaney said. “Visually, the impact for miles around and the view from the Dublin mountains will be of ugly towers with hundreds of apartments squeezed into them.”