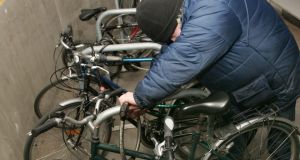 New Government policy on providing bike storage in apartment blocks will only encourage more people to cycle if infrastructure is improved on the roads, a leading planner has warned.

Joe Corr, president of the Irish Planning Institute (IPI), has said that while welcome, new regulations on providing safe and secure bike-parking facilities will not be enough to prompt use if cyclists do not feel safe on the roads.

Others have pointed to failings in providing specific details; while the guidelines encourage the provision of racks and cages, they do not discourage inferior products that do little to prevent thefts.

Bike storage has been included in the “Sustainable Urban Housing: Design Standards for New Apartments” document published earlier this month by the Department of Housing, Planning and Local Government.

It notes that enabling people to move easily around cities and urban areas is now “a fundamental planning concern”.

“Cycling provides a flexible, efficient and attractive transport option for urban living and these guidelines require that this transport mode is fully integrated into the design and operation of all new apartment development schemes.”

It sets out a requirement for a minimum of one cycle storage space per bedroom, and one space per two residential units for visitors.

They should be designed so that users feel safe – secure cages or compound facilities with electronic access and CCTV are recommended, as are individual bike lockers.

Cycling advocates pointed out a number of concerns regarding the policy.

The Dublin Cycling Campaign previously noted an historic “under provision” of secure cycle parking in apartment complexes. “This has led to bicycles being stored in apartments and on balconies potentially detracting from visual amenity and increasing maintenance costs for communal areas,” it said.

Geoff Liffey, chief executive of Cycling Ireland, said the issue of theft had to be addressed. He said people are not always comfortable leaving bikes in underground parking areas of apartment blocks as “there is a high risk of not finding it the next day”.

When theft leads to people giving up cycling, secure parking becomes a central tenet of increasing bike use.

David Timoney of the Dublin Cycling Campaign pointed to research that found one in six people who have had a bike stolen will not replace it.

While official Garda statistics show that an average of about 4,200 bikes are reported stolen every year in Dublin, he said the real level, when unreported crime is factored in, is about 12,500, according to Central Statistics Office data.

Green Party councillor Ciarán Cuffe said the guidelines would go a long way towards improving cycling provision but is suspicious of developers’ capacity to deliver.