Motorists, pedestrians and cyclists are warned to take extra care during Met Éireann’s orange weather alert for snow and ice for much of the east coast. 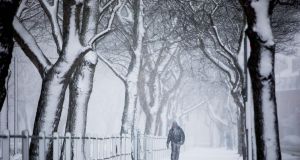 Heavy snow caused travel disruption and cancellations in many parts of Ireland on Sunday amid unseasonably cold weather for March.

Motorists, pedestrians and cyclists were advised to take extra care as Met Éireann issued an orange weather alert for snow and ice for much of the east coast.

The alert for Dublin, Carlow, Kildare, Kilkenny, Laois, Louth, Wexford, Wicklow, Meath and Waterford, which remained in place until 6pm on Sunday, warned of heavy snow showers and “accumulations in places and some drifting”.

The forecaster also issued a snow-ice yellow warning which will remain in place until 10am on Monday.

Between 3 and 7cm of snow had fallen on low-lying areas by Sunday morning, however snowfall eased off throughout the day. In areas of higher ground such as the Wicklow Mountains, 11cm of snowfall was reported. Parts of Laois were worst hit, with Louth “slightly less affected”.

Snow showers are expected to continue in some places on Monday morning, mostly in the east and the southeast of the country. However, it will be mainly dry in the afternoon with some sunny spells and temperatures reaching 3-5 degrees.

Liz Gavin, meteorologist with Met Éireann, said most snow showers would clear by Monday afternoon and conditions would improve across the country. The dry weather is expected to continue into Tuesday and Wednesday with milder temperatures of 7-10 degrees more in line with normal March conditions. The weather is set to become more unsettled later in the week.

Organisers of the St Patrick’s Festival in Dublin cancelled the Festival Big Day Out event in Merrion Square on Sunday and the 5K Road Race because of the snow. The Herstory Suffragette Walking Tour, the Guinness in the Liberties tour, the Poetry and Spoken word trail, the outdoor screening of Drive By Shooting and the Dublin Bay Prawn Festival were also cancelled.

St Patrick’s Festival said it was not planning on cancelling any of Monday’s events and hoped the final day of festivities could proceed.

People are advised to check the festival website and social media for updates on other festival events scheduled to take place on Monday.

Gardaí warned people to drive carefully as “many roads are slippery and with the low temperatures there may be black ice in places”.

Dart services experienced some delays on Sunday due to flooding on the lines while Dublin Bus was unable to operate on certain routes due to the snow. Bus Éireann, Iarnród Éireann and Dublin Bus expect to operate a normal service on Monday. The Luas will run a Sunday schedule on Monday, starting at 7am and finishing at 11.30pm.

It issued the following advice for motorists:

· Remove all snow from your vehicle before starting you journey. Snow left on the roof will become loose and can drop on to the windscreen during braking, thereby causing sudden and severe restriction to your vision. It can also fall off during your drive and cause injury to pedestrians or a reflex action by another driver.

· Clear windows and mirrors before you set out, use a screen scraper and de-icer. Do not use hot water on the windscreen as it can crack the glass.

· In snow and icy conditions slow down, use all controls delicately and leave extra distance between you and the vehicle in front. Avoid over steering and harsh braking and harsh acceleration. Use the highest gear possible to avoid wheel spin. Select a low gear when travelling downhill especially if through bends.

· In heavy snowfall, visibility will be reduced greatly. Do not drive on the tail-lights of the vehicle in front (target fixing). This can give a false sense of security and you will be too close to be able to brake safely. In heavy snow, use your fog lights, turn off your radio and open your window a fraction, so you can hear other traffic, especially at junctions.

· Use dipped headlights at all times, and fog lights in heavy snow to ensure you are seen by other motorists (but don’t forget to turn them off afterwards).

· Watch out for vulnerable road users such as pedestrians, cyclists and motorcyclists and allow extra space.

· Drivers of high-sided vehicles such as trucks and buses are particularly at risk from both the dangers posed by snow and ice but also from the high winds.

Pedestrians are advised to:

· Wear appropriate footwear. Walk on the footpath, not in the street. Walk on the right hand side of the road, facing traffic if there are no footpaths.

· Do not underestimate the danger of ice. Many slips and falls happen in places people regard as safe and secure, typically outside their front door, on the door step, on the path or while getting out of the car. When you approach a footpath or roadway that appears to be covered with snow or ice, always use extreme caution.

· Ice can easily hide under a light dusting of snow. Just because you don’t see the ice doesn’t mean it’s not there waiting for your unsuspecting footfalls.

· Be aware of overhead hazards! Falling icicles and chunks of snow pose a serious risk. Be aware of what’s happening above you, and stay clear from the edges of buildings.

Cyclists and Motorcyclists are advised:

· Motorcyclists / cyclists should not compromise their safety by their ‘need’ to travel in icy/snow conditions. Cancel your journey or take alternative transport.

· Visibility is reduced in snowy conditions so cyclists should wear a Sam Browne Bandoleer belt or high visibility vest and ensure the lights on your bike are working correctly.

· Motorcyclists should avoid wearing a dark visor in any bad light conditions.