Batten down the shamrocks, the ‘Son of the Beast’ is marching towards Ireland

Plummeting temperatures likely to make it feel below freezing for parades 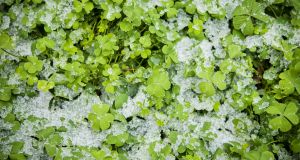 An orange weather warning has been issued for eastern counties as Ireland experiences one of the coldest St Patrick’s Day in living memory.

Met Éireann issued the orange alert for Dublin, Kildare, Louth, Wexford, Wicklow, Meath and Waterford between 3 am and noon on Sunday.

It said scattered heavy snow showers on Saturday night would lead to accumulations in places and some drifting. The latest cold snap has been nicknamed thd ‘Son of the Beast’ after the ‘Beast from the East’ brought Ireland to a standstill earlier this month with heavy snow and freezing temperatures. That snow storm was so severe that lying snow is still visible in parts of the country today.

An orange level alert warns the public to prepare themselves in an appropriate way for the anticipated conditions.

Earlier, Met Éireann issued a yellow weather warning for all of Leinster, Cavan, Monaghan and Waterford with warnings of freezing temperatures and snow showers from noon on Friday until midnight on Sunday.

The snow accumulations are likely to be in the eastern part of the country, but some will penetrate into the midlands and the south coast. Mountains in the east could get considerable falls of snow.

Gardaí have issued a weather warning to motorists asking them to heedlocal weather conditions, although they stopped short of advising them not to take unnecessary journeys. “This weather warning is not as extreme as the previous one,” they said.

Noon from Parnell Square to St Parick’s Cathedral. Temperatures for the start of the parade will be 5 degrees but it will feel much colder in a strong easterly wind. There is a chance of sleet showers. Met Éireann forecaster Harm Luijkx warned: “With the wind chill factor it is likely to feel like it is below freezing so wrap up well.”

1pm-2.30pm from the South Mall to Merchant’s Quay. Cork will have temperatures similar to Dublin, but it will not feel as cold. There is a chance of a shower, but it will fall as rain not sleet.

12pm-1.30pm from O’Connell Avenue to King John’s Castle. Temperatures will be around 6 degrees, but it will be dry for the parade.

11.30am-1pm from Fr Griffin Road to Prospect Hill: Conditions in Galway will be similar to Limerick with highs of 6 degrees. It will stay dry.

12pm to 1.30pm from Mail Coach Road to Our Lady Of Mercy Primary School. Highs of 6 degrees and dry.

1pm-2.30pm from The Mall to the Bishop’s Palace. It will be a blustery cold day for the parade with temperatures of 6 degrees and the chance of a passing shower.

2-15pm-3.30pm from Golden Island to Burgess Park. It will be cold and blustery with temperatures of just 5 degrees and the possibility of rain.