Mulranny the proud last stronghold of the Old Irish Goat 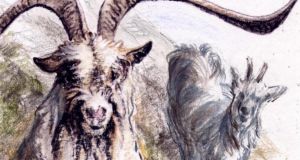 Old Irish Goats: As the last remaining goats of their kind, the animals warrant protection, not least as an irreplaceable genetic resource for future breeding. Illustration: Michael Viney

A neighbour stopped on the road one morning in our braver “alternative” years to lean over the hedge and inquire, in encouraging tones, as to the purpose of the “little housheen” I was building on the bank of the stream. Told it would shelter dairy goats, the first in Thallabawn, he seemed somewhat stuck for words, but offered blessings on the work.

The goat shed has long since disappeared, swallowed up in rampant fuchsia bushes that have taken over the hollow.

But a memory of Nancy does pop up now and then, of the sort one might retain from a time in one’s romantic affairs.

It is an autumn night in the shed, with the stream gurgling by, and I am kneeling on the straw with the bucket, milking Nancy, while her daughter shares the shadows with the cat. The flashlamp lights a glint in Nancy’s eye as I practise the two-tone squeeze that brings milk jetting from her teats. I tell myself we feel, perhaps, a bit bonded in some ancient, hippy sort of way . . .

Nancy was a Saanen, short-haired, pure white and of Anglo-Swiss breeding for milk yield and amiability. Saanens and Toggenburgs are now the standard livestock of a goat dairy industry booming both in Ireland and the UK.

How very different, I’m reminded again, from the Old Irish Goat, enduring life on remote and windswept hillsides of the west, and spotted from time to time above the coast road to north Mayo.

The animal’s small, wiry body is sheathed in a thick and floppy hearthrug of a fleece in a dozen different patterns of grey and umber. The male, with sweeping, show-off horns and a wispy Confucian beard, is some two hands shorter than a big Saanen billy and quite outclassed in authority by the oldest nanny, which is leading the flock.

The goats were admired a century ago by the great naturalist Robert Lloyd Praeger as he climbed among bushes of Mediterranean heather on rocky hillsides above Mulranny. As he wrote in The Way That I Went (1937): “They fit in so naturally among heather and gnarled rock, and mount a miniature Matterhorn with such a regal, king-of-the-castle air!”

Until this century, the animals went their way largely unremarked, except on their winter incursions into the village gardens of Mulranny. But in the past decade, recognition of their venerable bloodlines has swept them into attention as a rare and authentic Irish breed, surviving a peasant past when the goat was “the poor man’s cow”.

Their new significance began with the dedicated interest of Dr Raymond Werner, a UK historian convinced that a northern, cold-weather goat was domesticated by pastoral nomads in the Mesolithic age or even before. He was partnered by Mulranny’s Seán Carolan, who led support for protecting and adopting the goats as Mulranny’s “heritage” attraction on the Wild Atlantic Way.

The goats’ historical lineage was proven recently in a pioneering study led by geneticists from Trinity College Dublin. It compared the DNA of 15 museum taxidermy specimens from Britain and Ireland to modern samples from Irish dairy and feral flocks.

Lara Cassidy, first author of the study, describes “an amazing wealth of genetic information locked away in taxidermic collections”. Among them were in the national museums of Ireland, Wales and Scotland, but stuffed goats’ heads on local walls provided the first material. The DNA highlighted the Mulranny flocks as genetically similar to extinct “old goat” populations on Scotland’s Isle of Skye in the 1800s.

As the last remaining goats of their kind, the animals warrant protection, not least as an irreplaceable genetic resource for future breeding. Mulranny now has an Old Irish Goat Society, a visitor centre and a captive breeding programme in a high-walled garden.

It also offers online a most engaging and instructive “old Irish goats flyer”, which has been updated for the third Irish Rare Breeds Conference in the Mulranny Park Hotel next Tuesday to Thursday.

While the goats inevitably lead its story, the conference has speakers from the Netherlands, Norway and the UK, as well as Irish farming. It is supported by the Department of Agriculture, whose Green Low-Carbon Agri-environmental Scheme (GLAS) offers payments to farmers choosing to keep rare breeds, such as Kerry and Dexter cattle.

The National Rural Network, an offshoot of the Government’s rural development programme, notes that of nearly 50,000 farmers active in GLAS, just two per cent have selected the rare breed option as part of their plan.

Mulranny, meanwhile, seems likely to remain the last stronghold of the “pure” Old Irish Goat. As Seán Carolan will insist at next week’s conference, conservation of its hardy genes is worth proper national investment.