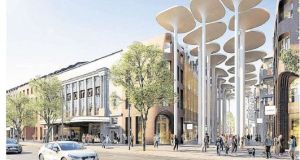 A computer-generated image of the proposed O’Connell Street redevelopment

Moore Street and Upper O’Connell Street in Dublin are set to be transformed under plans for a long-awaited redevelopment, which have been revealed for the first time.

UK property group Hammerson has decided to scrap the existing planning permission for a €1.25 billion enclosed shopping complex on the six-acre site in favour of an open scheme. It will see the historic street pattern restored, a new east-west pedestrian street between O’Connell Street and Moore Street, two new civic squares, shops, offices, apartments, a hotel and metro station.

Central to the scheme is a “historical trail” to commemorate 1916 Rising events and locations through the site. Last year the Court of Appeal overturned a declaration that buildings on and around Moore Street, part of the Hammerson site, constituted a national monument following a case taken by the State.

However, State-owned buildings at 14-17 Moore Street remain national monuments and are due to be developed separately as a 1916 Rising Commemorative Centre. Hammerson will refurbish 10 Moore Street, which will be used for retail, and the facades of 11-12 Henry Place, 17-18 Henry Place and 5 Moore Lane to “respect original fabric related to 1916”.

Hammerson will seek planning permission for the development early next year and hopes to complete work by the end of 2024.