OPW says move part of effort to manage size of herd, with animals sold on to game dealer 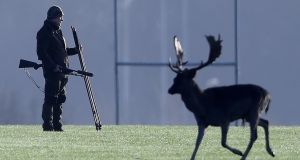 More than 30 wild deer from the herd in Dublin’s Phoenix Park were culled this week in an effort to manage its size. Photograph: Niall Carson/PA Wire.

More than 30 wild deer from the herd in Dublin’s Phoenix Park were culled in what the Office of Public Works (OPW) said was an effort to manage its size.

The OPW confirmed 34 animals were killed as part of a controlled exercise. Their carcasses were sold to a game dealer approved by the Department of Agriculture.

Although a valued asset of the park, deer numbers are kept under control for a variety of reasons including biodiversity protection and in order to help reduce the potential for road traffic accidents.

The cull was carried out in consultation with the School of Biology & Environmental Science at University College Dublin (UCD) and a veterinarian expert in deer welfare, the OPW.

The cull was criticised by the Alliance for Animal Rights (AAR) which said it was a money-making exercise as the meat was sold on.

“No animal is safe if money is to be made,” the AAR said. “Shooting deer in view of other deer is barbaric, all animals experience fear at seeing their friends killed -as humans would.”

The OPW said no figures were immediately available in relation to the meat sales. A total of 203 deer were shot as part of eight culls carried out in 2016 and 2017 with the carcasses sold to a meat supplier for €19,488.

“The role of the wild fallow deer herd in the Phoenix Park as a valuable component of biodiversity must be recognised,” the OPW said in a statement.

“However, this must be balanced with an equal recognition of the potential for deer to impact adversely on a range of other biodiversity values, particularly where other conservation habitats and their dependent species are concerned.

The OPW said an excessive deer population can result in higher numbers of road traffic accidents and increase the potential role of deer in the epidemiology of specific diseases.

However, the Department of Agriculture told an Oireachtas Committee this week that there was no evidence that deer play a significant role in transmitting TB to cattle in Ireland, with the exception of Co Wicklow where separate culls are being carried out.