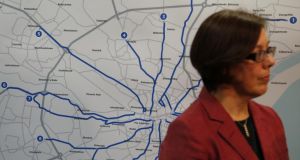 Anne Graham, of the National Transport Authority, at a media briefing in November to unveil details of phase one of the BusConnects project. File photograph: Nick Bradshaw/The Irish Times

A further 80 north Dublin households could lose part of their front gardens under alternative plans now being considered by the National Transport Authority (NTA) for its BusConnects strategy.

The NTA told The Irish Times it would be writing to between 70 and 80 households on the Swords Road in relation to an alternative option being proposed to accommodate bus and cycle lanes under the plan.

Residents and businesses on the proposed Swords to city centre bus corridor raised concerns about an aspect of the plan that would see one-way traffic passing through Santry in the northbound direction while southbound traffic would be diverted via Coolock Lane and the Santry bypass.

The alternative option includes a widening of the Swords Road through Santry to allow a traffic lane in each direction to be maintained, in addition to the bus lanes, which would impact on the 70 to 80 properties.

BusConnects aims to overhaul the current bus system in the Dublin region by redesigning the network and building 16 high-capacity bus and cycle corridors into the city.

The NTA has previously said property owners who lose a portion of their gardens will, on average, receive a compensation payment of €25,000.

The owners of some 345 properties were told last November that they face losing part of their front gardens under the first four proposed corridors from Clongriffin (120 properties), Swords (110), Blanchardstown (100) and Lucan to the city centre (15). A further 1,000 property owners are expected to be informed in the coming weeks in relation to the 12 other corridors.

The NTA said the households on the Swords Road would be offered one-to-one meetings. The alternative plan is now part of the public consultation on the first four corridors, which runs until February 15th.

A NTA spokeswoman said both options were “viable” and that the one-way system was initially proposed because “there was no impact along that area on any properties”.

A community forum, established by the NTA to gain feedback on the Swords corridor, was told of the alternative option for the Swords Road on Tuesday.

Fine Gael TD Noel Rock, who was at the meeting, said “the residents most directly affected by this weren’t in the room when the change was announced”.

Fianna Fáil councillor Paul McAuliffe, who was also present, said representatives from businesses and residents association said the one-way system “would have a profound impact on Santry village”.