President Michael D Higgins and his wife Sabina have attended day one of the BT Young Scientist and Technology Exhibition in the RDS Dublin. Video: Bryan O'Brien 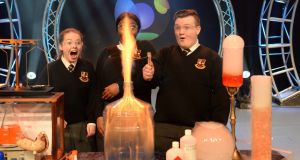 Irish farmers want to make their contribution to countering climate change, but would like more training on how best to reduce carbon emissions arising from production of methane linked to agriculture.

That was the emphatic finding of Tadg Heneghan (15) and Jack Keena (16), transition year students at Coláiste Mhuire in Mullingar, Co Westmeath, following a survey of 100 dairy farmers and seven major dairy processors operating in Ireland.

The climate change issue was regarded as “important or very important” among 95 per cent of respondents, explained Keena, who lives on a dairy farm. This indicated a willingness to break the chain which suggests “more cows equals more methane, equals more climate change”.

For their project for the 2019 BT Young Scientist and Technology Exhibition the students sought an indication from farmers and co-ops of best approaches in such circumstances. This suggested a variety of measures would add up to significant mitigation, Heneghan added. These included better slurry spreading techniques using injection technology, more soil testing to optimise application of fertilisers and the use of “protected urea” which is coated and can be used all year – all with less associated carbon.

Their motivation arose, he said, from the words of biologist David Attenborough, who warned climate action was necessary “before it’s too late”.

The outstanding finding, he believed, was 87 per cent of respondents said they would attend more training to better inform their climate mitigation response. But it was clear that in addition to training there was a need to support farmers as they reduce emissions on their farms, as the options were more expensive than current practices.

The depletion of soils, especially in countries most affected by global warming, led to Rory Coleman (15) and Rachel Fletcher (15) developing “a solar-powered solution for the aquaponic growth of leafy crops in developed countries”.

The students from Scoil Mhuire in Buncrana, Co Donegal, have developed a production system where gravel replaces soil, and the roots of water cress and spinach plants extend into water below. Goldfish living there generate nitrate wastes which in turn feed the plants, while a solar-powered pump aerates the water.

Their critical finding was that variations of growing conditions resulted in bigger plants, Coleman pointed out. Their idea emerged from viewing an episode of BBC TV’s Countryfile, illustrating the potential of aquaponics – a combination of aquaculture, which is growing fish and other aquatic animals, and hydroponics which is growing plants without soil.

Their prototype was “small-scale and cheap”, which made it ideal for use in Africa, Fletcher said. The return in terms of nutrition was also clear, especially for women, as the plants they were generating were high in iron and folic acid, she added.

They hoped to scale up their system so more plants can be produced using bigger species of fish.