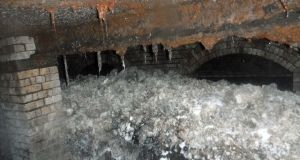 A giant obstruction made up of household waste has been found blocking a sewer in a Devon seaside town.

The 64m-long mass of hardened fat, oil and wet wipes, also known as a fatberg, has been discovered in drains in Sidmouth.

Fatbergs form when people put things including fats, nappies, wipes and sanitary towels down toilets, and this one will take around eight weeks to remove, according to South West Water (SWW).

SWW’s director of wastewater, Andrew Roantree said: “It shows how this key environmental issue is not just facing the UK’s cities, but right here in our coastal towns.

“It is the largest discovered in our service history and will take our sewer team around eight weeks to dissect this monster in exceptionally challenging work conditions.”

Mr Roantree has warned the public to be more wary about what they dispose into drains.

He added: “If you keep just one new year’s resolution this year, let it be not to pour fats, oil, or grease down the drain, or flush wet wipes down the loo. The consequences can be significant, including sewer flooding in your own home.

“Put your pipes on a diet and don’t feed the fatberg.”

South West Water has assured the public there is no risk to bathing waters in the seaside town, and work to remove the blockage is due to start on February 4th.

In 2017, a 250m-long fatberg was found in sewers beneath Whitechapel, east London.

A chunk of that blockage later went on display at the Museum of London. – PA