The silver-backed chevrotain - a deer-like species the size of a rabbit, also known as the Vietnamese mouse-deer - has been rediscovered in the wild 30 years after it was feared lost to science. Video: Global Wildlife Conservation 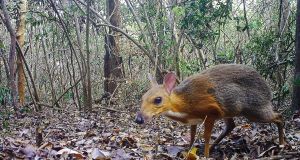 A silver-backed chevrotain, also named the Vietnamese mouse-deer, pictured in an unknown location in Vietnam by a camera trap. Photograph: NCNP/AFP via Getty Images

A “mouse-deer” that has not been documented alive for three decades has been discovered living in the wild in Vietnam.

The silver-backed chevrotain, a deer-like species around the size of a rabbit, has a silver sheen, and has been hanging on in a region of the country ravaged by poachers.

They are shy and solitary creatures weighing less than 10lbs, walk on the tips of their hooves and have two tiny fangs.

Also called the Vietnamese mouse-deer, the animal was last recorded in 1990, and is the first mammal to be rediscovered on the Global Wildlife Conservation’s (GWC) list of top 25 most wanted lost species.

The Tragulus versicolor was first described in 1910, based on specimens obtained near the city of Nha Trang, Vietnam.

However, since 1990, no scientifically validated sightings have been confirmed, and it was feared that high levels of snare hunting in the region may have pushed this species to the brink of extinction.

Details of the rediscovery have been published in the Nature Ecology & Evolution journal.

An Nguyen, associate conservation scientist for GWC and expedition team leader, said: “We had no idea what to expect, so I was surprised and overjoyed when we checked the camera traps and saw photographs of a chevrotain with silver flanks.

“For so long this species has seemingly only existed as part of our imagination.

“Discovering that it is, indeed, still out there, is the first step in ensuring we don’t lose it again, and we’re moving quickly now to figure out how best to protect it.”

Mr Nguyen’s colleagues conducted interviews with local people in three Vietnamese provinces to identify chevrotain sightings consistent with descriptions of the silver-backed chevrotain in an effort to locate the species.

The field team then set three camera traps for five months in an area of southern Vietnam where locals indicated they may have seen the animal, resulting in 275 photos of the species.

The team then set up another 29 cameras in the same area, this time recording 1,881 photographs of the chevrotain over five months.

Scientists know almost nothing about the species’ general ecology or conservation status, making it one of the highest mammal conservation priorities in the Greater Annamites, one of GWC’s focal wildlands.

Hoang Minh Duc, head of the Southern Institute of Ecology’s Department of Zoology, said: “The rediscovery of the silver-backed chevrotain provides big hope for the conservation of biodiversity, especially threatened species, in Vietnam.”

There are 10 known species of chevrotain in the world, primarily from Asia.

Despite their nickname, they are neither mice nor deer, but the world’s smallest ungulates – hoofed mammals.

A team is now setting out to determine how large – and stable – the population is, the wider distribution of the species, and understand the threats to its survival.

The authors conclude that although the species can be thought of as “rediscovered” to science, the local surveys indicate that this species has not been considered lost among the people of this region. – PA