An Taisce calls on Varadkar to clarify climate change remarks 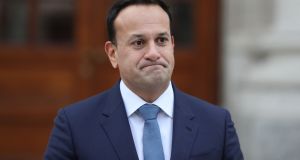 Taoiseach Leo Varadkar: ‘people may use less heating and also that means fewer deaths as a result of cold weather’. Photograph: Nick Bradshaw

The Taoiseach needs to “urgently clarify” recent comments he made about the “benefits” of climate change, An Taisce has said.

The environmental organisation has said Mr Varadkar’s “extraordinary remarks” about climate change will “undoubtedly be seized upon by climate deniers and delayers” both nationally and around the world.

Speaking at the launch of the first progress report on the Climate Action Plan last week, Mr Varadkar said: “It’s interesting to see that there can be pluses and minuses as well, like actually one thing that we definitely face as a result of climate change is warmer winters, we’re already experiencing warmer winters, and that actually means using less energy, because it’s warmer. And people use less heating and also that means fewer deaths as a result of cold weather.

“A big problem that we have is winter-related illnesses, and people dying because of very cold winters, but then on the down side of things, you know hotter summers, people dying because of hypothermia, exposure to UV rays, but it’s interesting when you do look at those things that there is ledger and there are benefits and there are downsides, the downsides outweigh the benefits but we need to be aware of them too.”

Mr Varadkar’s comments, which were first reported in The Sunday Business Post, have been met with widespread criticism in recent days.

An Taisce said for the Taoiseach to be talking “in terms of a ‘ledger’ where there are more or less equal benefits and downsides to climate breakdown betrays a reckless disregard for science”.

“Complacency and baseless optimism are no substitute for real, measurable climate actions in line with the best scientific advice. The era of dithering and delay has long passed. Mr Varadkar and his advisors need to get real before climate change damages far more than just our international reputation,” it added.

Chance of snow showers in some areas over weekend