Michael Viney: How ancient is the Thallabawn shipwreck?

Our columnist has been observing the local wreck for 40 years. Could it really be a medieval relic? 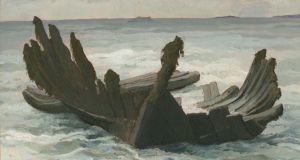 Mayo shipwreck: the twisted timbers after storms exposed them at Thallabawn in 1983. Painting: Michael Viney

On a lean, worn coastline so open to Atlantic storms it can be hard for human history to keep its story intact. The big strand below us at Thallabawn, in Co Mayo, has held two distinctive monuments. One is now virtually erased by wind and wave. The other, clutched in the deep matrix of sand, now beckons only by its timber fingertips.

Until a few decades ago the strand had as its focus a conical mound about 10m high, with a crust of ancient masonry. This was the remains of an early monkish settlement and attendant graveyard, rising on an ancient headland severed from the dunes.

This isolated pyramid – “the burial mound”, as everyone knew it – was washed around at every high spring tide, old coffins and bones slowly spilling down the sides. Big tides in the early 1990s left it like an apple chewed to the core, and it finally sank down into a round, flat mandala of stones.

The other legacy, more seamark than landmark, shows only as the tide drops back, and then to an extent, which has varied over the years, decided by storms that can shuffle the substance of the strand.

When we first settled on the hillside above the shore, 40 years ago, enough of the ancient wreck protruded to make a low, jagged palisade of rib tips curving to the prow. It hinted at a vessel the size of a small modern trawler, perhaps 25m or more. Roman numerals incised on the prow suggested that, unladen, she drew about 3m of water.

The ribs’ timber is gnarled black oak, now hard as stone, fronded here and there with bladderwrack and studded with white barnacles. They were pierced for treenailing, some wooden dowels still firm, and somewhere in the garden is a sculptural wave-worn spike, dried to silver, that I salvaged from the tideline.

Of course, we wanted to know more. But while neighbours had stories of other local wrecks; one, for example, in 1871, shed a load of timber that roofed a church; another had a cargo of pottery. But the one surviving at the tideline had “always been there”, even in the memory of very old men and their grandmothers. There was lack even of folk invention about it, such as can spring up with any deep sense of place – a legacy, perhaps, of clearances and famines in this remote, landlord’s corner of Connacht.

Then, early in 1983, a winter of running storms had stripped back such a deep stratum of sand that the wreck was laid bare to the keel. It was broken-backed and twisted as in the painting I did then, and the keel was littered with rough limestone ballast. Among it we found shards of black-glazed pottery.

Ethna, her researcher’s instincts aroused, sent samples to the National Museum of Ireland, which identified them as 19th-century blackware of a sort made at Knockcroghery, in Co Roscommon. This left us recalling the shattered, drifting cargo of the boat wrecked a few leagues up the coast, and me wondering if Knockcroghery was where the word “crockery” came from.

The wreck’s exposure brought into play the strong local instinct for salvaging useful and durable materials. Some oaken ribs had been shaped by adze into heavy beams twice the height of a man. Over the years some pieces had already found their way ashore, to serve as field gateposts or lintels, or as anchor for a fence: they were, quite clearly, indestructible.

The following spring tide, in calm weather, left the wreck dry and accessible, whereupon tractors headed out across the strand. I watched their silhouettes, black and busy against the glittering sea, and a slow procession of beams hauled slithering over the sand.

When, this month, the Connacht archaeologist Michael Gibbons walked the strand he found the wreck almost completely buried in sand again, as it has been for many years. But the boldly projecting prow and a few black fingertips of ribs were enough to wake his speculation of a vessel of “the late medieval period onwards”, still nameless and undocumented.

Thousands of shipwrecks around Ireland are the focus of the underwater-archaeology unit of the National Monuments Service. Concerned for their “rich cultural heritage”, the unit’s database already holds some 12,000 records, and an inventory of wrecks in east-coast waters was published in 2008.

Potentially richest of all, of course, are sunken galleons of the Spanish Armada, as in the wreck sites off Streedagh, in Co Sligo, now under diving survey. Several more, indeed, are thought to lie off Mayo, and our early fancy about Thallabawn’s wreck was for its possible role as a supply boat accompanying the Armada.

“Late medieval onwards” may hole that below the waterline, but we need, I fear, more excavating storms to see how much “heritage” is left.