Eastern half of country will see ‘significant accumulations’ of snow, forecaster says 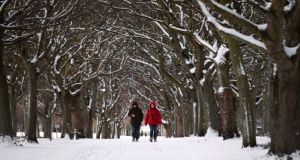 A snow scene in Fairview Park, Dublin during the 2018 ‘Beast from the East’. Photograph: Dara Mac Donaill/The Irish Times

Met Éireann has issued a weather advisory for snow and freezing temperatures covering the period from Sunday to Wednesday.

It said those days would be very cold with daytime temperatures in the low single figures and sharp or severe frosts at night. After a cold and dry weekend, temperatures are set to fall on Sunday as an easterly airflow settles across the country.

Showers of sleet or snow have been forecast for eastern counties from Sunday evening onwards, leading to hazardous conditions on roads and paths. The greater Dublin area and Wicklow are likely to get the brunt of the snow.

The cold weather, which originated in Siberia, is expected to remain until Thursday at the earliest. Temperatures are forecast to stick at around zero, but the wind chill factor will make it feel even colder, and they could fall as low as minus 7 on Monday morning.

Connacht and Ulster will see temperatures of minus 3 to minus 5 on Monday and Tuesday night under clear skies.

The eastern half of the country will see “significant accumulations” of snow, according to Met Éireann forecaster Gerry Murphy. There will be a dusting of snow Sunday into Monday and then further wintery showers are expected Monday into Tuesday.

Mr Murphy said it was too early to say exactly how much snow could fall, as some of it might come as rain or sleet, but there will certainly be snow on the ground next week.

“The Dublin region into Wicklow will bear the brunt of it. With easterly winds, Dublin can get plenty of showers. With the cold temperatures, some of the showers will fall as snow,” he explained.

“In general, the eastern coastal counties of Leinster can expect falls of snow starting more significantly on Sunday night, then on through Monday and more especially on Tuesday because the winds pick up a bit. The showers push further inland.

“That maintains the cold weather into Wednesday which should be mainly dry at the moment, but showers will see some more snow accumulated in Leinster and the mainly the eastern half of the country.

“Later on Wednesday into Thursday a weather system pushes up from the southwest which will fall as snow as it moves up across the country. That could give some more substantial amount of snow.”

Some weather models show the frontal system pushing through the country quite quickly, meaning any snow that falls could be short-lived. However, if the front is slow moving, it could bring “significant and lasting snowfall” when it hits the cold air, according to Met Éireann forecaster Liz Walsh.

The long-term forecast shows milder air pushing across the country next Friday melting the snow and bringing back more normal temperatures for this time of year.

The Department of Housing, which is responsible for dealing with extreme weather events, said it had already made contingencies for the cold snap forecast.

Extra beds were being prepared for homeless people and stocks of salt were being made available to treat roads.

In a statement, the department said Met Éireann, local authorities and the National Directorate for Fire and Emergency Management were “continuing the monitor this evolving situation”.

Irish Water and local authorities asked homeowners, businesses and the owners of unoccupied properties to check for leaks and to conserve water where possible ahead of the freeze in order to protect water supplies.

Freezing temperatures in January and the subsequent thaw led to a higher than normal volume of bursts in the water network.

“We are also appealing to customers to check outside pipes in particular that can become frozen and burst during periods of cold weather and report leaks they see on the public network to us,” said Irish Water’s head of operations Tom Cuddy.

The Dublin Society for the Prevention of Cruelty to Animals (DSPCA) issued a welfare warning to the owners of horses ahead of the expected cold spell. It said hay and feed should be bought in advance in case roads become impassable and that, where possible, horses should be kept in stables during the freeze.