Woman raped in the Burren awarded $2.5m by US court 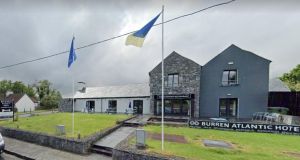 The Burren College of Art was the host school and Rhode Island School of Design arranged housing at the Burren Atlantic Hotel and Holiday Village. Image: Google Maps

A US judge has awarded $2.5 million to a woman who was raped during a study programme in the Burren, Co Clare, in June 2016.

In a court ruling in Providence, Rhode Island, a federal judge found that Rhode Island School of Design (RISD) failed to provide safe and secure housing that would have allowed the former student to lock her bedroom door and prevent the perpetrator entering.

US District Court chief judge John McConnell jnr ruled that RISD had breached its duty of care by failing to ensure students had keys to their rooms and that its negligence led to the attack.

According to Tuesday’s verdict, reported by the Providence Journal, the woman, identified only as Jane Doe, attended a three-week programme in Ballyvaughan along with other RISD students and a teaching assistant.

The Burren College of Art was the host school and RISD arranged housing at the Burren Atlantic Hotel and Holiday Village. The judgment states that while the houses could be locked from the outside, students were not given bedroom keys.

On the night they arrived, the students went for a celebratory drink. The woman and her assailant walked back from the pub and the man asked her for a kiss. She kissed him on the cheek and said no when he asked for another. She showed him to the door, which she then closed and realised she could not lock.

The man returned later and raped the woman, who reported the incident to the teaching assistant the next day. The assistant arranged for medical care and her attacker was later dismissed from the programme, the judgment states.

According to court documents, the perpetrator accepted responsibility for the sexual assault. In the aftermath, the woman suffered post-traumatic stress and depression. While she went on to earn her degree and remains an accomplished scholar and artist, the judge found she had suffered permanent damage.

A spokeswoman for RISD said the school was disappointed by the findings but could not comment on the case due to confidentiality. “We take allegations of sexual misconduct by or against our students very seriously, and we are dedicated to providing thorough, prompt and equitable responses to such allegations when brought forward,” she told the Providence Journal.

The Burren College of Art said it had “no comment to make on this matter”, which is internal to and has been resolved by Rhode Island School of Design.