Holohan has ‘huge amount of regret’ over CervicalCheck issues 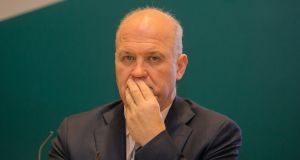 Dr Tony Holohan, chief medical officer, Department of Health, said a lot of work had been done so that lessons could be learned from the experience of women who had been harmed and who had ‘reasonable questions’. Photograph: Gareth Chaney/Collins

Chief medical officer Dr Tony Holohan says he has “a huge amount of regret” over the harm done to women in the CervicalCheck controversy.

He specified the harm involved as being the failure to disclose to the women the findings of retrospective clinical audits of their cases carried out by the screening programme.

Dr Holohan was asked about the CervicalCheck issue at the regular National Public Health Emergency Team (Nphet) briefing on Thursday. This followed the settlement reached this week by Lynsey Bennett, a 32-year-old mother of two who is seriously ill with cervical cancer, of her High Court action over the alleged misinterpretation of her slides.

He said a lot of work had been done to find mechanisms that are patient- and women-centred so that lessons could be learned from the experience of women who had been harmed and who had “reasonable questions”.

Asked if he would apologise to Ms Bennett, Dr Holohan said he did not know the details of the case.

He said he was aware that a letter from the clinical director of the programme had been read out in court, which had addressed the issue.

In spring 2018, major controversy erupted when it emerged that hundreds of women had not been told the outcome of a review of their slides carried out by CervicalCheck.

This emerged following a court settlement in a case taken by Vicky Phelan over the reading of her smears. A succession of court cases taken by seriously ill women has followed since, despite efforts to set up a tribunal where they would be heard in private.

Asked if he would apologise to other women affected by the controversy, Dr Holohan said the State and the Taoiseach had apologised for the “significant harm” done through non-disclosure of clinical audits.

The issues involved had been investigated in great detail in two investigations, but no findings of “adverse functioning” had been made against the programme.

He described the failure to deliver on commitments to share information with women was a “substantial wrong”.

Pressed further to apologise, he said: “I have a huge amount of regret at to what happened to women in those situations”.

Dr Holohan said Ireland was one of only a few countries that introduced retrospective audits for cervical cancer screening.

He said CervicalCheck shared this information with its clinicians “but the clinicians did not share it with the individual women”.

Only through the investigations of the Department of Health after Ms Phelan’s case was it learned that of 200 cases, three-quarters of the women were not given the audit information, he said.

Stressing that he had “huge sympathy” for the women affected, he said this “shouldn’t have happened”. The non-disclosure of information did not impact on their clinical care, he added.

Meanwhile, the Tánaiste told the Dáil the State Claims Agency should settle CervicalCheck cases “quickly, sensitively and in a humane way” where negligence was not disputed.

Leo Varadkar said he had made this point previously at meetings with the agency, which handles legal cases against the State.

He added: “I am sure we can emphasise and reiterate this point again”.

Mr Varadkar was responding to Labour Party leader Alan Kelly who challenged him about the case of Ms Bennett who is seriously ill with cervical cancer.

“Why is she being dragged through the High Court when she should be spending time with her daughters,” he asked.

“Why three years after you told us that women would not have to go through the courts are there 200 more cases in the courts?”

The Tipperary TD added: “Is the State Claims Agency waiting for women to die?”

He said it would be cheaper for the State because of the law where next of kin pursuing cases will not get the same amount of award and he called on the Tánaiste to urge the agency to deal with cases quickly and humanely.

Mr Varadkar said he wished Ms Bennett’s case could have been settled sooner.

“Can the State Claims Agency be directed to handle cases in a humane way where negligence is not disputed? Yes, and I have done so.”

He said, however, that delays would occur where the facts were disputed.

The Tánaiste pointed to the CervicalCheck tribunal and said it would allow for “quicker and better outcomes for the women affected”.

Mr Kelly said the Tánaiste promised three years ago that women would not have to go through the courts but there were about 200 cases lined up in the High Court.

Mr Varadkar said problems arose where doctors and scientists say they did not misread a smear test “and they are also entitled to have their side of the story heard. We do not want that to happen in courts”.

That was why the CervicalCheck tribunal was established, he said. “It will allow cases to be fast-tracked.

“It will allow them to be heard in a more sensitive way and, hopefully, it will produce quicker and better outcomes for the women concerned.”