Another Life: Kayaking and caving as routes of imaginative escape

Michael Viney: Steam issuing from caves must have seemed signs from spirit world 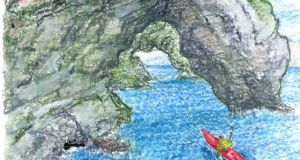 Kayaking: the dream of some in fretful lockdown. Illustration: Michael Viney

Ages ago, in my teens, I was conned into buying a second-hand but beautiful white canvas canoe. Its whiteness was most of its beauty, but this was due to many coats of paint, each adding another skin of lead to the canvas.

I took this overweight ark to one of Brighton’s crunchy shingle beaches. It meant a lengthy seafront haulage, the canoe lashed to an elderly perambulator, my gaze fixed bravely ahead.

The mortification of the launch (paddling children, shouting parents, wrong size of waves, inability to point the bow) need not detain us. But the romance of the project helps to explain my ageing fascination with seagoing kayaking, an adventure that, once again, will resume attraction along the Wild Atlantic Way.

As an intimate interface with nature, paddling beneath the cliffs among seals and seabirds, or as a passport to pristine offshore islands, kayaking may also be a dream of some in fretful lockdown, at least to the point of checking the prices online.

At the top end are exquisite, slender shapes moulded from polyethylene and light enough to be lifted from the roof of the car. Some offer space for camping gear, or serve as a platform for angling. There are doubles and inflatables, not all of them fit for ocean waves.

Sea kayaking in Ireland has had its pioneers, notably Dublin solicitor David Walsh, who has been paddling strong for more than 20 years. His special contribution has been Oileán, his paperback guide to no fewer than 574 Irish islands, updated in 2014.

President Michael D Higgins once presented a signed copy of Oileán to the Prince of Wales. The prince has a kayaking island named after his title in Alaska, but may not otherwise have needed all the helpful detail of difficult tidal races, menacing rocks and where to find drinkable water on shore.

What stirred my imagination was reading the remarkable kayaking diary of Co Kerry’s late Timmy Flavin, who circumnavigated Ireland in 1991. He sadly died in 2015, and his widow Bríd published his daily log, with ample maps and photographs, four years later (€15, for charities, from bridofarrell@icloud.com).

Averaging nearly 50km a day, in 10 hours of paddling from a start at dawn, Flavin and his buoyant friend Donal Dowd set out from Courtown, Co Wexford, and completed their odyssey, camping overnight at island and coastal beaches, in 37 days.

There were some beautiful times, now and then, but what sticks in the mind is the relentless effort, often in headwinds and choppy seas, and the litany of physical miseries. By Portacloy in north Mayo, “Donal’s armpits are stinging and his fists are swelling. I have a sea boil starting on my left wrist. Both of us never really heated up all day.”

A separate thread of my reading has led to another brave, if sometimes inevitably painful, passion that a locked-down romantic might explore. I was led there by an archaeologist whose specialism is the exploration of caves.

The scientific interest of Ireland caves – or, at least, their contents – has rested most often with their deposits of pre-glacial animal bones (mammoths, hyenas, bears). But Marion Dowd, who lectures in the Institute of Technology Sligo, has explored more than 100 caves and spent hundreds of hours underground. She has found a whole series that became the focus of “votive deposition” and probable ritual retreat in the Bronze Age.

A favourite is the Moneen Cave, entered high in the Burren and offering Dr Dowd the skeleton of a medieval boy. On rare occasions in very cold weather, she relates, a plume of steam issues from the cave entrance and, seen from the lowlands, might seem as a sign from the spirit world.

Dr Dowd’s writings include The Archaeology of Darkness (Oxbow Books). Its subject is deeply and graphically explored as “conducive to entering altered states of consciousness, allowing people to access deeper levels of knowledge and awareness”. Its meditative promise continues to attract, she observes, small gatherings of Irish New Age and neo-pagan cavers who leave some interesting artefacts of their own behind.

For those more intrigued by caving for possible post-pandemic adventure and togetherness, Tim O’Connell’s chapter in The Archaeology of Darkness offers expert briefing on such enterprise. He writes as a veteran of horizontal and vertical caving in Clare and Fermanagh and some epic descents into darkness abroad.

The simple reason people do it, O’Connell says, is curiosity. It’s true, he concedes, that when you turn off the light “sounds like lapping water turn into gurgling voices, distant repetitive noises like dripping water can sound like approaching footsteps . . .” But cavers, I’m sure, also carry spare batteries.

For the caving community and a choice of clubs, go to caving.ie, the website of the Speleological Union of Ireland.