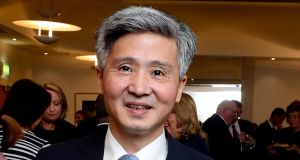 Ambassador He Xiangdong: has been told that during a six-hour interrogation, the Chinese Public Service Bureau demanded Richard O’Halloran to personally pay $6 million “to assist with his release from China and to sign a statement in Mandarin”.

A lawyer acting for a firm employing a Dublin businessman barred from leaving China over a dispute has called on the Chinese ambassador to help secure his immediate release from his “illegal detention”.

In a letter sent on Friday, David Maughan, a partner at Dublin law firm William Fry, told Ambassador He Xiangdong that Richard O’Halloran’s basic rights have been “significantly breached” by China’s judicial system and police during his almost two-year detention.

Mr O’Halloran has been prevented from leaving the country after becoming embroiled in a dispute involving the Chinese owner of a Dublin-based aircraft leasing company he works for.

The father from Foxrock has not been accused of any wrongdoing and has assisted the Chinese in their prosecution of Min Jiedong, the owner of Dublin firm China International Aviation Leasing Service (CIALS) who has been jailed for defrauding Chinese investors in a fundraising scheme used to buy an aircraft now leased to a Finnish airline.

Mr O’Halloran joined the company after the scheme. His family fears for his physical and mental health given that he has been hospitalised on two occasions with serious medical issues.

“On both occasions, he required hospitalisation for six days and he had to be resuscitated as his heart stopped,” said Mr Maughan in the letter to the ambassador.

The lawyer complained that Mr O’Halloran has been denied legal representation as a witness in court and on seven occasions during his interrogation in Shanghai.

The lawyer said given that the case against Min had concluded, “any further detention in China is a breach of Richard O’Halloran’s fundamental and basic rights and is illegal”.

Mr Maughan told the ambassador that during a recent six-hour interrogation, the Chinese Public Service Bureau (PSB) demanded Mr O’Halloran personally pay $6 million “to assist with his release from China and to sign a statement in Mandarin”. A demand of $36 million was made of the Dublin company – a request described by Mr Maughan as a “corporate ransom”.

The statement did not reflect what he had told the PSB and was “tantamount to a confession that Richard O’Halloran was guilty of embezzlement and fraud”, he said.

The Chinese embassy said more than 7,000 Chinese nationals have lost €160 million from money “illegally collected from the public” in China in a crowdfunding scheme and that about €50 million was transferred to CIALS to buy the Airbus A330 aircraft.

“Mr O’Halloran’s co-operation is essential to transfer the revenues of CIALS to its parent company and return the illegally collected funds to those victims,” said the embassy.

It confirmed that Mr O’Halloran was still restricted from leaving China by law, despite Mr O’Halloran being told last month that his exit ban had been lifted.

A spokesman for Mr O’Halloran’s family said the businessman did not want to comment.