Road-widening scheme at Naas to be finished by mid-February, after multiple delays 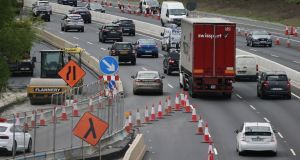 Speed restrictions on the new three-lane carriageway on the M7 motorway in Co Kildare will be lifted in mid February, according to the latest project update from Kildare County Council.

The M7 Naas widening scheme was originally due to have been completed last April, with the Sallins bypass and Osberstown interchange due to be completed later this year.

Kildare County Council said last August that the the M7 elements of the work would be delayed until Christmas.

But in the latest update issued on Tuesday, the council said the works would now be completed by mid- February.

The announcement means the temporary 80 km/h speed limit remains in place on the M7.

Final works on the M7 include drainage at Junction 10 Newhall and at a number of verge locations at Newhall and Lewistown.

The council said “pending completion of these works, and in the interests of both worker and public safety, the temporary 80 km/h speed limit is being maintained.”

The council said, however, that traffic on the M7 would not be able to use the new interchange at Osberstown to access Naas until the Sallins bypass opens.

All three lanes of the upgraded M7 are currently operating at a reduced speed limit of 80km/h from junction eight Johnstown to the M7/M9 interchange at junction 11.

Construction began on widening a 13.5km stretch of the M7 in January of 2018. It was originally anticipated by the contractors SIAC and Colas that all three lanes would be in operation in both directions by last April.

Figures from TII show 14,500 speeding fines have been issued along the road over a period of about 18 months to last August.

Local District Court Judge Desmond Zaidan and the Courts Service have both raised concerns over how to deal with the increase in cases arising from the speed checks.

The upgrade project also involved the replacement and relocation of the existing ramps at Junction 10 Naas South Newhall to the main Naas Newbridge dual carriageway, the construction of a new interchange at Osberstown and a new Sallins bypass.

1 More than 30 people queue overnight to secure property in Carlow
2 Coronavirus: Further 430 cases reported in State is most in a day since April
3 Man with electric scooter who died in Meath was due to get married in the coming weeks
4 Gardaí appeal for information on rape of teenager in Co Mayo playground
5 Traffic volumes show Donegal locking down to greater extent than Dublin
Real news has value SUBSCRIBE