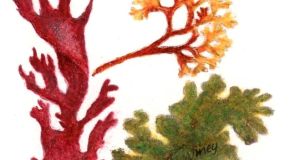 The newest choice of botanicals for gin is the seaweeds of the shore, such as the traditional Irish dillisk, carrigeen and sloke. Illustration: Michael Viney

The prostrate juniper bush outside my bedroom window sprawls wide and low, its piney, spicy fronds the wren’s favourite hunting ground for little spiders. If snow comes, it offers cosy refuge to the acre’s battalion of blackbirds.

The bush is a garden centre cultivar, in one of the dozen shapes that might have been on offer. Across the world, the named types of Juniper communis run to 170.

There’s even a national cultivar, “Hibernica”, a tight, narrow, blue-green column more than 5m tall , bred from a single clone. This parallels the distinctive, phallic pillar of the “Irish yew”.

When it comes to sex, however, the prostrate bush outside my window has to disappoint. Like every holly tree I ever planted in the hedge, it is disappointingly male and thus berryless, even as its fruit might suit the season. A few of the juniper’s dark, aromatic berries (actually its fleshy seed cones) add richly tangy notes of autumn flavour when crushed into a venison stew or savoury squash.

My own thought had been for the stuffing of our Christmas guinea fowl, but then research by the Irish chef JP McMahon found recipes for game in old Irish “big house” cookbooks. They include one for guinea fowl with bananas, almonds and gin – adding juniper by infusion, as it were.

Noting a recent “gin revolution” in Irish cuisine, McMahon offered an enhancement of cured salmon: “Douse the salmon with a few shots of gin and mix some toasted juniper berries through [a dusting of] salt and sugar.” Leave in the fridge for three days, rinse off and dry for another day. The result: “lovely”.

There has, of course, been another Irish gin revolution going on, in small-scale production of the spirit, adding “botanicals” other than juniper. One from Glendalough uses “11 ‘classic’ gin botanicals along with some locally foraged plants such as nettle, watermint, clover flowers, ground ivy, heather flowers, rosehips . . . ” (the list goes on for half a hedgerow).

Juniper has given gin its basic character since the earliest days of herbal medicine. Its wide span of curative potential (such as chest infections) ran counter to gin’s later popular reputation as an abortifacient – “mother’s ruin”. As straight booze, it was developed in the Netherlands in the 17th century: genever in Dutch and genièvre in French.

The newest choice of “botanicals” are the seaweeds of the shore, such as the traditional Irish dillisk, carrigeen and sloke (clockwise from left in my drawing). But juniper still commands its place, and I can’t improve on the “tasting notes” offered for Donegal’s new “maritime gin”:

“The palate has incredibly bright and soft juniper to the fore, and as it subsides, An Dúlamán’s complexity is revealed in rich umami, brisk salt, zest and then a buttery oyster smoothness with hints of chestnut and firm tannin. Given time, sweet notes of peach ebb to a comforting warmth.”

Five locally harvested seaweeds give this brew its maritime essence. The same plants flourish in Newfoundland, where a prize-winning distiller uses purple dulse harvested from the Grand Banks. His gin is “slightly salty, full of juniper – it’s like being in an ocean mist, next to a herb garden”. Quite.

The Da Mhile farmhouse distillery in Wales infuses its gin with seaweed plucked from St George’s Channel, along with lemon, thyme, fennel, pepper, cardamom and salt. The seaweed gives the gin “a slight green tinge”.

Juniper was the first woody plant to grow across Ireland after the final retreat of the ice age. It survives, after a fashion, in both bushy and prostrate forms, where the plough, fertiliser and hill burning have not reached and grazing is least intense. That has left patches of plants, often so loose and widely scattered that only 50 together, with fruiting female bushes and no plant more than 20m from another, are thought to have much of a future.

Since juniper habitat became number 5,130 in the European Union’s nature conservation list, such “formations” of juniper have occupied much Irish study and even seedling-by-seedling counts, mostly on western coastal heaths or limestone grassland inland.

The last survey for the National Parks and Wildlife Service, in 2017, found some sites hit by prolonged turlough flooding and a few others by overgrazing. But others among 82 formations had high plant densities. High on Corraun, for example, the Co Mayo peninsula opposite Achill, more than a million wind-dwarfed plants are twined among the heather (Irish Wildlife Manuals 101 at npws.ie)

None of the new “botanical” gins, I notice, seeks virtue in “locally plucked” juniper berries. Berry-eating birds at least have the virtue of dropping digested seeds and the chance of further germination.