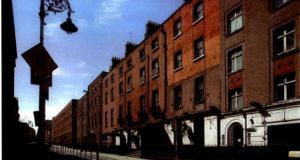 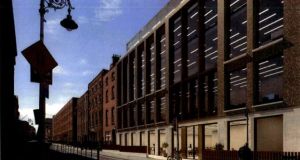 The proposed development will have shops or cafes on the ground floor, but will mostly be used for offices

Plans to demolish a terrace of Georgian houses on Kildare Street would “denude the character” of the street and “erode the historic building stock” of the city, the Irish Georgian Society has said.

Ternary Ltd, a company controlled by beef baron Larry Goodman, has lodged an application with Dublin City Council to demolish the Kildare Street Hotel, which occupies three Georgian buildings on the street, and replace it with a five-storey block over a two-storey basement.

The new development will have shops or cafes on the ground floor, but will mostly be used for offices. Earlier this year Ternary received planning approval from An Bord Pleanála for a €100 million redevelopment of the adjacent Setanta Centre, part of which adjoins the western end of the hotel site.

The Dublin Civic Trust, An Taisce and the Green Party have already objected to the demolition of the hotel, which occupies 47-49 Kildare Street close to Leinster House.

Georgian society executive director Donough Cahill said the proposed development would result in an “irreversible loss” of the city’s heritage.

“Dublin’s heritage of Georgian buildings is intrinsic to its identity and its preservation has long been accepted as a staple of good planning and conservation practice. The current proposal to demolish those Georgian houses forming part of the Kildare Street Hotel runs contrary to this and would see the irreversible loss of part of the city’s built heritage.”

Desmond Guinness had been prompted to establish the society in 1958 by the demolition of houses at Kildare Place at the southern end of the street, Mr Cahill said.

“Kildare Street remains one of Dublin’s premier thoroughfares and, in addition to Dáil Éireann, is home to multiple national institutions whose buildings contribute greatly to its distinctive character,” he said.

“Regrettably the evolution of the street has not always been successful with a considerable number of fine Georgian houses replaced during the second half of the 20th century by monotonous new office blocks that contribute little of interest to the streetscape.”

The Ternary proposal, would “similarly denude the character of the street and further erode the historic building stock of Georgian Dublin”.

The company has said its proposal had been subject to “expert conservation assessment”. It said the buildings had seen “substantial and very significant modifications over time” and “only fragments of the original fabric remain”.

However the society “refutes the suggestion that cumulative changes to the building and inappropriate maintenance of their fabric provide reason for their demolition”, Mr Cahill said.

“The Irish Georgian Society is of the view that the buildings proposed for demolition make an important contribution to the character of Kildare Street, that the applicants have provided no justification for their replacement, and so recommends that this planning application be refused.”

Orwell: A Man of Our Time – A sloppy, disorganised biography
9