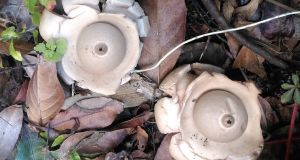 The attached photo is of some strange fungus, which appeared in the garden earlier this month. Is it Myriostoma coliform?
Linda Wall, Mornington Rd, Dublin 6
No, it is the earthstar, Geastrum triplex, of the same group of fungi.

While working in my garden I spotted the thinnest worm I have ever seen. It was about 15cm in length.
Tom Mulqueen, Knockfin, Co Mayo
It’s a horsehair worm, probably the thunder worm, Mermis nigrescens, which comes out after rain but lives in the soil.

I recently came across an unusual isopod parasite on a mackerel caught in Galway Bay. About 2cms long, it belongs to the same isopod group as the woodlouse, and was identified by a biologist at the Oceanography Centre in Southampton as Nerocila orbignyi. Biologists would be interested in getting more reports of it.
Dr David McGrath, GMIT, Galway

We watched this 2m-long common dolphin swim directly towards the shore at Ballycotton. As it reached the slipway it turned east and swam very close to the shore for about 100m before a wave just washed it ashore. By the time we got to it about five minutes later, as far as we could see it was dead.
Sean Fleming, Ballycotton, Co Cork

This seaweed covered one whole section of Dunlaughin beach, Ballyconneelly on October 18th. Amazing colour; can you identify it?
Ann Keogh, Oughterard, Co Galway
It needs a close-up to identify the species, but stranding of red seaweed is unusual; more usual are the brown kelps and wracks.

Ethna Viney welcomes observations and photographs at Thallabawn, Louisburgh, Co Mayo, F28 F978, or by email at viney@anu.ie. Include a postal address, please.