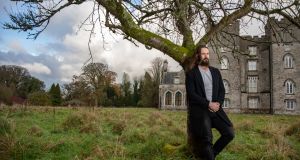 Randal Plunkett, the 21st baron of Dunsany, is a film director and holder of one of the oldest surviving Irish peerage titles. Photograph: Barry Cronin

Like his ancestors, Randal Plunkett was once able to look from the windows of Dunsany Castle, between Trim and Dunshaughlin, Co Meath, onto herds of cattle and sheep that filled many of the estate’s 1,600 acres.

Today, the cattle and sheep are gone: “When I became a vegan, I couldn’t really continue to have livestock here, could I?” the 21st baron of Dunsany, from a line tied by blood linked to St Oliver Plunkett, reflected.

Plunkett is part of the European Rewilding Network, which is attempting to restore nature across the continent, from reintroducing wild bison in the Vanatori-Neamt park in Romania, to the restoration of the huge Naliboksky Forest in Belarus.

If difficult to bring about, the mission statement of the European project – which was set up in 2011 in the Netherlands, but has since spread its influence – is simple.

For Randal Plunkett, Ireland’s first member of the project, the work in Dunsany began six years ago with a decision to rewild 750 of the 1,600 acres around Dunsany Castle and rid the plains of the vast estate from sheep and cows.

At a time when global warming is a massive issue, there are very few doing anything really about it, in my view

The first fruits are emerging. This year, the estate had the first breeding pair of woodpeckers ever recorded in Co Meath, along with sightings of red kites, snipe and stoats – and even an unconfirmed spotting of the rare red squirrel.

Confirming the presence of the pair of greater spotted woodpeckers, Niall Hatch of BirdWatch Ireland said: “There is no evidence that they were ever in Meath before.” However, a few have been found in recent years in Wicklow, having migrated from Britain.

“We have rewilded about 750 acres. Up to 500 acres is forestry and another 250 acres are grass fields,” said Randal, “Before, we had our own herd of cattle and sheep and rented out fields to farmers who grazed their animals.”

Though begun six years ago, the work has been in gestation for decades: “I’ve never been convinced that animal agriculture is cost-effective and it’s proven that it is detrimental to the environment.

“I don’t think that it is the way forward to focus on such an inefficient means to produce food, particularly when you see the level of carbon being emitted as a result of it,” said Randal.

“We still have tillage but everything else is being left to wildlife which I’ve never interfered with, not even by sowing grass in the initial stages.

“When we first allowed things to go wild, we had a lot of weeds at first, as you can imagine. It was the worst thistle and ragwort that I had ever seen. But then, as the weeds began to abate, saplings and wildlife started to appear as the natural ecosystem took hold.

“I used to pull up to 40 stalks of ragwort a day to avoid chemicals. Now I don’t need to, as there are hardly any because wild flowers and plants have taken control.

“We started to see a lot more insects. Then more small birds appeared before the bigger birds of prey began making their home here,” he declared.

Recently, visiting botanists from Dublin’s Trinity College – who have come to the estate ever more frequently as the changes wrought by the rewilding have become visible on the ground – spotted 50 butterflies within 200m of each other.

“That’s a lot of butterflies in such a short distance. It’s really interesting to see how nature has balanced itself. There are no great quantities of any one thing,” said Randal, who took over the estate from his father in 2011.

“I think when it comes to climate change and the ecosystem, we really do tend to overthink things. The environment needs to simply be allowed to exist.

“When I first started this, I tried to do a lot, but now I realise that instead of trying to control it, I just try and maintain and enhance what is there.”

In the last number of months especially, Randal has been rehabilitating injured animals and birds found on the land and releasing them back into the wild.

“I’d say in recent months, we have helped to save six injured foxes, 12 hedgehogs and a large number of birds.”

His project has gained national recognition from agencies such as BirdWatch Ireland and the Irish Bee Conservation Project, who are hoping to co-operate with Randal to create up to 200 hives for dwindling native Irish black bees in the years ahead.

“At a time when global warming is a massive issue, there are very few doing anything really about it, in my view.

“I’m lucky enough to be in a position where I’ve got privilege and can do something to help.”

So far, the work at Dunsany is being funded by Randal himself: “I’m not getting any grants or money from anywhere at the present. I feel that I’m doing my duty to my country and my planet.

“The estate is a business so it’s all about balancing a budget. I have gone without holidays and other things for this, but no success is without sacrifice.

“This is important and it transcends comforts.

“At the moment, I’m funding the project myself with income from tillage and my film production facilities in Dunsany. Every time a company uses these facilities, they are contractually obligated to donate a tree to the reserve.

“We have plans to plant more forestry in the next five years, possibly with the aid of State forestry subsidies at that stage.”

We are on the last bus, but if we all got together and acted now and governments followed, then we still have a chance

The rewilding project is not without its obstacles.

“I face challenges all the time. One of the biggest threats to this project is overdevelopment of this area.

“In the current Dunshaughlin area plan, there is talk about a new train line cutting across parts of this forest – the very forest where the woodpeckers are now living.

“People say [the coronavirus] lockdown made them appreciate nature but once they are back on the hamster wheel, eaten bread is soon forgotten,” he said.

It’s nine years since the film-maker inherited the ancient castle before his 30th birthday, after the death of his father Edward Plunkett, the 20th baron of Dunsany.

The young man embraced the rural challenge, despite it being worlds apart from New York, where he grew up, and London, where he studied film-making.

However, despite the rewilding, he still manages to maintain his love of film, with a new production he wrote and directed, The Green Sea, due to be released next year.

Although now a strict vegan, he is the first to admit he was a huge lover of meat dishes in his younger days.

“I was the biggest proponent of steak. I ate a lot of it and I ate raw eggs for breakfast like Rocky, before finally realising that it’s not good for you or the environment.

“I was a steak-eating, rock-concert-going city slicker and now I’m lord of the rural manor who has swapped leather clothes and shoes for more eco-friendly cruelty-free options.

“Wild nature gives you something you didn’t expect that you needed. Before, I was interested in possessions, status and money. That was all that motivated me. Now, even if I achieve nothing else in my life, I will consider it a success.”

Passionate about his new lifestyle, he hopes it will make a difference and encourage others.

“At the minute, the vision is wilderness. The future has to be rewilding. I’ll be long gone in 200 years but the trees I’m planting will hopefully be enjoyed by generations to come, if we embrace biodiversity now.”

The European Rewilding Network can help others across the continent to deliver rewilding dreams, he believes: “I feel privileged to join a movement of like-minded individuals who are committed to restoring Europe’s natural heritage.

“We are already on the last bus, but if we all got together and acted now and governments followed, then we still have a chance.”