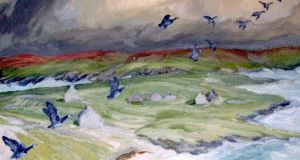 Inishbofin, long and low on our horizon, rests between clouds and sea in one of autumn’s distant shades of grey, a last landfall before the wide ocean.

Its notable refuge for nesting corncrakes makes summer rasps from the rushes at dusk a treasured muezzin-call. Now on the island a far more familiar bird, the song thrush, has claimed attention in the migratory ebb and flow.

Since someone shot the island magpies, Inishbofin has many more resident thrushes – from three pairs to more than 15. They make themselves scarce in September, but in October migrant cousins from Europe “can be observed at dawn, dropping like arcing tracer bullets from a brightening sky”.

The observer is Anthony McGeehan, lifelong Belfast birder and a student of Inishbofin’s avian life. His birdwatching enriches his new and impressive book from Collins Press, To the Ends of the Earth: Ireland’s Place in Bird Migration. The arriving thrushes are furtive, restless and highly strung. “Splutters have a tinny quality,” he notes, “and piqued alarm calls outrank blackbird in hackle-raising pitch.”

By December the island has more than 100 of them, and cold weather across Britain can quickly double or treble the numbers. Many have come through Britain from Scandinavia and the Low Countries; 40 were perched in a single bush at dawn on Hook Head, Co Wexford, on October 1st, 2016.

Such intimate local examples are woven into a book of admirably global scope. Ireland is just one node of migratory flyways that web the world. From north to south and east to west , birds fly in all directions at all times of year. But within Ireland’s rich roster of species that come to feed or breed, are birds of quite awesome endeavour.

Among the small waders that winter on our western shoreline are purple sandpipers, dodging the spray at wet rocks to feed among the seaweed. Some of them, fitted with new, featherweight, electronic data loggers, have recorded their migration routes.

Their spring return to Arctic Canada to breed makes one landfall at the southern tip of Greenland. Coming back from Baffin island, however, the birds fly the Atlantic non-stop, often using the tailwinds of depressions spinning east. “Underneath demure looks,” writes McGeehan, “lurks an avian Amelia Earhart.”

The seasonal pendulum of temperature, food supply and day-length is enough to explain the north-south axis of most of Ireland’s winter migrants, geese and waders chief among them.

The evolution of migration, with 100 million years in play, favours a general picture of dispersals spreading in search of better food and breeding conditions.

By natural selection and loyalty to birthplace, migrations gradually become genetically entrenched, so that young birds such as swallows “head off in a predetermined direction for a certain time and then cease migration at a place they have never been”.

Changes in climate and switches in Earth’s magnetic field have shaped and reshaped the migrant impulse. Some journeys can now seem extreme. The record is held by the Arctic tern, passing Ireland in May on its way north from Antarctica to breed. But even this transit has been substantially extended by use of the new 1.4-gramme data loggers, strapped to a leg and noting sunset, sunrise and location.

Rather than flying straight up the middle of the Atlantic, the terns take detours, zig-zagging in tropical trade winds. Some have even flown east along Antarctica in winter to feed as far as New Zealand. Among them, McGeehan notes, was a bird ringed on Co Down’s Copeland Islands that clocked up more than 90,000km.

Since the terns can and do feed anywhere the sea has fish, their leisurely, wind-assisted wanderings form just one of many kinds of “migration”. And much of this expertly researched book is on how birds make their journeys, rather than why.

They use multiple cues and shift between them, as “every star in the sky shines into their eyes, the air they breathe contains a unique isotope signature and the differential pull of the Earth’s magnetic field indicates latitude.”

“Tapping the Earth’s magnetic field,” writes McGeehan, “is the natural world’s masterstroke”, as useful to fruitflies as to homing pigeons. Birds use polarised light to calibrate their magnetic compasses, and he delves bravely and readably into the science of geomagnetism and avian optics.

His history of Irish migration research gives proper credit to the work of Richard Barrington, who, in the later 1800s, recruited the keepers of the island’s lighthouses and lightships to report on the thousands of night-flying birds drawn, often fatally, to their beams.

As it happens, another new, large-format book from Collins Press is Lighthouses of Ireland, in which artist Roger O’Reilly paints more than 80 in their often spectacular settings. His poster-style images are crisply delightful. But thinking of Barrington’s army of keeper correspondents makes you wonder who’s around now (if anyone) to tell one blinded bird from another – or to keep count of the morning corpses piling up on the tower’s balcony.