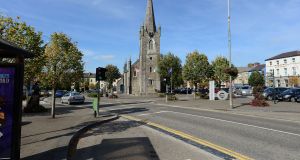 Listowel in Co Kerry has been named as Ireland’s tidiest town for 2018. Photograph: Domnick Walsh

Listowel in Co Kerry has been named as Ireland’s tidiest town for 2018, the first time it has won the overall prize.

The town also claimed the award of Ireland’s tidiest small town at the 60th SuperValu TidyTowns award ceremony at the Helix in Dublin City University (DCU).

Listowel fought off fierce competition from many places including Carrickmacross, Co Monaghan which was also nominated in the tidiest small town category. Carrickmacross has 400 volunteers.

Westport, Co Mayo won the award for Ireland’s tidiest large town. This was a source of considerable satisfaction for Westport-native Minister of State for Tourism Michael Ring who presented the award to the Tidy Towns committee in the town.

The village’s heritage is underpinned by the support of the Leslie family who live nearby and they built many of the old houses in the town.

Listowel emerged on top from a record 883 entries from towns and villages throughout the country in the SuperValu National TidyTowns competition.

The judges said Listowel’s victory was a tribute to all the people of the town and to the local authority.

Listowel has won a gold medal every year since 2008 in the competition and was Ireland’s tidiest small town in 2015 and 2016.

Listowel TidyTowns chair Julie Gleeson attributed the win to “hard work”. The town had close to the main prize for a number of years but this year had got across the line.

She said much of the success of can attributed to the “dawn crew” - a group of volunteers who got at 7am during the summer to pick up litter and water the flower baskets.

She said local schools and housing estates had contributed to keeping Listowel tidy.

“We can do things that we weren’t able to do before,” she said clutching the trophy. A seat was put in the square in Listowel after winning the tidiest small town for two years in a row.

Ms Gleeson said Listowel was a heritage town but not a tourist town in the way that other towns in Co Kerry were. She said she hoped the win would put them on the map.

She said Listowel’s most famous son John B Keane would have been proud of the award as he was a big supporter of the TidyTowns.